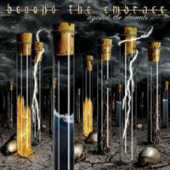 About 20 seconds into the first track on this record, I was already thinking “Wow, another Swedish melodic death band that sounds exactly the same as everyone else!”... then I read something interesting. Beyond the Embrace are from the US! I very quickly changed my train of thought after learning this. I now think they are band from the US that sound exactly the same as every melodic death band from Sweden.

Don’t get me wrong, they are a good band. They are tight, fast, thrashy and have a good sound, but as usual the good sound they have sounds basically the same as everything else at the moment. If you could take Soilwork and breed them with In Flames (that could be nasty) you would give birth to Beyond the Embrace.

To give the band credit, they are young and do play very well. The songs are well structured and well recorded, but when Beyond the Embrace do find their own sound they will definitely be the leaders on melodic death in the US by far. The band have also incorporated some very nice acoustic and classical sections, displaying a very good musical knowledge and understanding which can and will only lead to bigger and better things from this talented outfit.

The vocals are a stand out feature on this recording. Shawn Gallagher has a great range moving from the traditional death/black growl to a clean vocal in many songs which is similar to that of Soilwork’s all powerful front man ‘Speed’ Strid. An interesting feature to this band is they have 3 guitarists. It’s a bit of overkill as far as I can tell, as most of the time they are doubling each other, but it seems to work.

Bottom Line: Beyond the Embrace right now sound basically exactly the same as older Soilwork and In Flames. But this band will improve and find their own sound. Keep close eye on their upcoming releases.