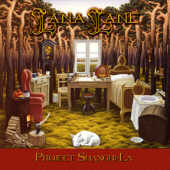 Boy, this was and is a hard album to sit through. Heralded as progressive symphonic rock, Lana Lane and her impressive cohort of buddies, consisting of Mark Boals (ex Yngwie Malmsteen) and Vinnie Appice of Black Sabbath and Dio, to name but a few. One would assume “Project Shangri-La” would be an interesting and rather accomplish record, right? Wrong, “Project Shangri-La” is one of the most dried up and boring excuses to waste an hour of your precious time.

Uninspired and boring classical power rock ballads make up the entirety of this record. Lana Lane’s vocals are so bland and vocally unimaginative, that once you have heard the first one or two tracks, you generally get the gist of the whole album, and it would be a pointless exercise to continue listening to this drivel.

As a side note to you all classical/opera music lovers out there: the 10th track on “Project Shangri-La” is a cover of Henri Maske’s ‘Time to Say Goodbye’, also made famous by Andrea Bocelli. I don’t really know if this will whet one’s appetite for Lana Lane’s music, I truly hope it doesn’t.

I cringe and cry every time I subject myself to this worthless album. Many an individual from the metal/rock press has claimed that Lana Lane’s voice has improved and matured through each of her albums, with “Project Shangri-La” being the culminating point. It actually terrifies me to think about how much worse one person can get as a singer. If you have the desire to listen to some really bad female vocals in a power rock vein, then “Project Shangri-La” is the album for you. However, do not ever try and dig up her back catalogue, I shudder at the results.

Bottom Line: Well you can judge by the score that “Project Shangri-La” is clearly not a corker of an album. Suffering from bad song-writing, bland vocals and boring musical arrangements, it is time for Lana Lane and friends to take up pottery or flower pressing.