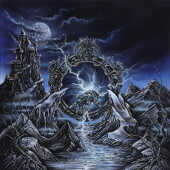 It is always nice when bumping on the latest promotional CD you have just received with no preconceptions or expectations of a band. You can never be truly disappointed; the only possible emotions are puzzlement, mild elation or flat out rabid air-guitaring. Before the other day, I had never heard of Dead Emotions and their debut CD; “Gates to the Unseen” and I was mildly impressed to say the least of the band’s accomplished ability.

Dead Emotions have played with well-known dark/gothic metal bands such as Tristania and Graveworm, so if this is any indication of their ability, then it probably serves as a fair measuring stick. Dead Emotions play a form of dark/death metal which is reasonably brief in length (at 8 songs and 37 minutes), yet they never bore a listener with overblown raucous melodies and musical wankery that many others of their ilk do so repeatedly.

Subtle keyboard passages from Christian Pfaller open the account for a few of the songs on “Gates to the Unseen”, and it is with these harmonious entrances that the plethora of Dead Emotions talents really shine. Haunting German lyrics originally from renowned German author Frederick Nietzsche, on the track ‘Vereinsamt’, coupled with their eerie keyboards from aforementioned synthesist, Christian Pfaller and monotonous guitars from Kratzer and vocalist Selmer, truly create the dreary and dismal feel that I’m sure Dead Emotions are looking for.

Whilst have some truly captivating moments, Dead Emotions and ultimately “Gates to the Unseen” suffer from being slightly too monotonous and downbeat. Maybe the tempo should be increased just a little. Just when you thought the riff in ‘Leidenschaft In Rot’ was going to pick up a little, your hopes are crushed and they revert back to safer grounds. However, when all said and done, “Gates to the Unseen” is a very competent and sound debut, and Dead Emotions should only improve in the future. I am expecting big things, lads.

Bottom Line: These youngsters from Munich play an impressive downbeat blend of death and dark metal, which suffers from a few drab moments, but on the whole is a worthy debut. “Gates of the Unseen” should be pursued by anyone looking for an enriching experience in dark/death or gothic metal.