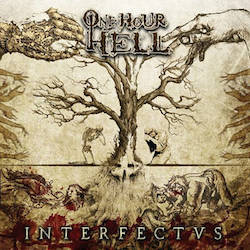 One Hour Hell. In the old days one word would be enough to name a band, some needed two; nowadays it takes three or more to achieve the same thing. Does it matter if it comes to the content of the albums? Not really. Is it something One Hour Hell should care about? Not really. It was just an observation I guess. One Hour Hell is from Sweden, they arose from the ashes of a band Oxide, 2008 saw the release of their first album called Product Of Massmurder (I am yet to check that one out) and Interfectvs is their second offering. Those who expect some kind of standard Swedish death metal may be up for surprise here because OHH is anything but standard.

Death metal is the main segment of this album but it also comes with lots of thrash elements, mosh pit friendly grooves and crushing breakdowns. Album sounds freakishly heavy and reminds me of The Acacia Strain a little in the sound territory, but that is the only comparison that I can think of. Guitars are tuned very low and they’re creating such turbulence in my speakers that if I had an older pair I would start worrying if they’re going to be ok. Sound is one thing but the ideas those guys came up with and way they deliver the goods is something that simply slays. Tons of heavy stuff (no pun intended), played with lots of tempo changes, some shredding and even an occasional solo here and there. I like it a lot I gots to say. But that is only a part of this album. Drummer is not here to keep the rhythm, well, that too, but he also creates such a rumble that at some point I caught myself listening to drums only. I'm not a drummer so I can't give you any technical info here, but there is massive amount of double base, blast beats and all kinds of other goodies to be found. Is it the best I ever heard? No, but that one is definitely one of my favorites of late in drumming category. The combination of guitars and drums only is almost enough to carry this album by themselves, but when you add brutality of the bass guitar and the bestial, deep growl of the vocalist, this monstrous brute is ready to devastate. Interfectus Est, Covered In Sin, Bodybags are my personal favorites but on the other hand I could probably give you the whole playlist here. Try those three; it should suffice to spark the interest in anybody to listen to the whole album.

I've listened to Interfectus numerous times in the last couple of days and enjoyed it very much. It isn't for everybody, I know, but I believe that if it comes to attractiveness and ability to keep the listener entertained - these guys are doing it right. If it comes to sound, recording, mixing and production, mastering, booklet - everything is top notch. What else can one ask for?