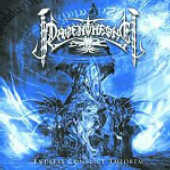 Type: Full-Length
Release Date: 2002
Label: Avantgarde Music
Genre: Black, Epic, Folk
1 The Gargoyle
2 Eaters Of The Dead
3 Among Whispering Walls
4 Soulstorm
5 Endless Conflict Theorem
6 An Oath In Silence
7 Dragon Of The Nightsky
8 A Night Among The Ruins Of Basra
9 The Wayfarers Song
10 Dawn Deliverance
11 Serenade Of The Dead (Outro)

It took me ages before I finally figured out what album this reminded me so much of, and I kicked myself when it finally dawned on me that it was none other the "Tales From the Thousand Lakes" masterpiece by Amorphis: one of my most cherished CD's ever. The guitar production, for one, is the biggest resemblance and the warm and simple keyboard melodies brought back so many memories that my eyes almost welled with tears. Add clear vocals and replace the slow doom sound of Amorphis with a more upbeat rock style and you've got Raventhrone: a laid-back death-'n-roll band that keep the idea simple and would easily appeal to a metal fan of any style.

It's the kind of album that grows on you with every listen, and after two or three runs I guarantee it will stay in your player for no less than a month. Particularly catchy and memorable songs like 'Soulstorm' and 'A Night Among the Ruins of Basra' will take up residence in your head before you know it and you'll find it impossible to focus on anything else.

I described the album as "retro" in the opening sentence for its interesting and slightly old-school approach and daring vocal/lyrical style that few bands today would use. The lyrics are simple verses that sound like ancient sagas describing battles, evil minions, heroes, Norse gods, and the like; in a very simple and understandable way. It differs greatly from the majority of bands today who use so many metaphors in their lyrics to the point where they become too vague to pick up anything from them. While some songs have a filler riff lurking here and there it is generally hard to find any faults with this band. So get their album, buy it, order it, steal it, I don't care, it kicks ass and if you're a fan of any kind of metal I guarantee you'll enjoy it.

Bottom Line: Very easy to like. An interesting album that belongs to no genre in particular, but somehow to all of them.