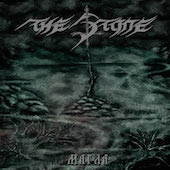 Albums of Serbian’s leading black metal force are always somewhat challenging in view of their complexity and the foreign language. Honestly speaking, I apologize for the 7.6 I gave to Teatar Apsurda. At the time of my review I had not yet fully realized its quality that actually demanded an 8+ rating. However, I tried to give Marлa (“The Fog”) many chances, because I did not want to make the same mistake again. The result is that I still think the albums of The Stone ask for my full attention, but they are definitely worth listening – even though they are not flawless.

Maybe Marлa reveals the typical problem I have with the works of the Serbians. It’s no big deal and maybe the term “problem” sounds too negative. What I want to say is The Stone put everything they have, can and know into each and every song. The overflow of ideas leads to the almost tragic result that at the end of the day, the songs suffer from certain uniformity and a lack of recognition value. Don’t get me wrong, they are still good songs, but I always have the feeling the band could do it better in view of its enormous potential. All songs of the A side present the whole spectrum of the band. A flood of bulky riffs is combined with relatively abrupt breaks and tempo changes, while the omnipresent vehemence does not really know ups and downs. This Serbian way of blackness is amazing, individual and – in rare moments – exhausting. A good idea does not automatically serve the respective song in every case and if I would be the manager of the squadron, I would like to give them the order to check their ideas again and again whether or not they fit the song context. I would also be happy if they would vary the degree of intensity. Marлa is intense, dense and vigorous, but the consistent level of metallic belligerence makes it difficult to realize the real force of the band’s material. However, I am pretty sure they can be happy that I am not their manager.

Only six tracks result in an album with a playtime of more than 44 minutes. This alone illustrates the ambitions of the horde from Belgrade. It’s great to see that all songs of the A side as well as 'Moon’s Ray' (forgive me for using the English translation) have many thrilling sequences. I am absolutely sure that every line-up member has put heart and soul into the recordings for this work. Later releases of The Stone have shown that the band has learned to realize its visions in a more focused way. But in this pretty early status of their career, they were seemingly surrounded by fog sometimes – and this made it obviously nearly impossible to always find the right track. (But it would be a daring thesis to say this was the fog that gave the album its name…). All in all, the vinyl from 2006 is an authentic, prickly and defiant output. It scores with a defiant production which avoids severe deficiencies. Every black metal fan who likes interwoven songs will enjoy this album, no doubt about it. Simple-minded dudes such as me pay respect to this release and identify a lot of good moments without being fully convinced.