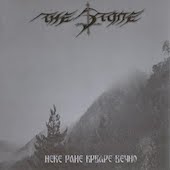 Those of you who like to dig in the black metal underground might have already made acquaintance with The Stone. The Serbian formation has been active since 2001. The here presented album was released in 2007 and its simple yet extremely atmospheric cover picture caught my interest. Due to some slightly incompetent mail orders, it was not easy to get a copy, but now the hunt is over - and it was worth the trouble. Of course, high fidelity fetishists will moan about the production. The Stone does not impress with a surgically precise sound. The mix is a little bit blurred and relatively flat, but I do not think that this is really a problem. It does not affect the authenticity of the band and since the release of "Under a Funeral Moon", if not before, we all know that black metal does not need a perfect sound in order to reveal its foul stench. Moreover, don't be fooled by the year of the release. The album was already recorded in 1999 and it was the only full-length under the band's previous name Stone to Flesh. So do not be too harsh in terms of the mix - and let's be happy that the album was ornamented with a new cover. The first artwork sucked, despite or exactly because of the fact that it was closely aligned with the name of the output ("Some Wounds Bleed Forever").

Anyway, The Stone blast their way through the Serbian forest in a violent manner. The title track, for example, combines stormy lines with slightly strange keyboard sounds that work in the background. Satan smiles. The infernal legions march again and they appreciate the fact that the soundtrack for their hellish crusade is not affected by external influences. Pure black metal is flowing free and The Stone know enough options in order to keep the music diverse and interesting. The grim and frosty compositions follow pretty traditional schemes, although the guys are not afraid of using blast beats every now and then. However, the guitar work and the scurrilous nagging of Nefas celebrate the old school. It seems to be only logical that the generic line-up (vocals, guitars, bass, drums) performs an equally generic form of black metal. This results in compositions that connect flattening mid-tempo parts with high velocity attacks. Even the amazingly intense crusher 'Serbian Wood' has a less rapid sequence at the end. But regardless of its astonishing tempo, this track belongs to the best pieces of Some Wounds Bleed Forever.

Further songs demonstrate the power of The Stone as well. 'My Demonic Face' shines with a great instrumental part which is mainly formed by rasping guitars. A heroic background choir also appears for a short time. Guess that Immortal's "As the Eternity Opens" served as the model for this part. However, The Stone seem to be intrinsically motivated - otherwise I would have no explanation for their lush discography - and they cannot be blamed for being copycats. This is not to say that each and every song makes my day. Frankly speaking, the artistic intention behind the short 'Razor Speed' remains a mystery. Nevertheless, most parts of this output hit the bull's eye. Even the bonus tracks do not fall short of expectations. They are taken from a 7" which was originally released by Eclipse Productions in 2004. The sound of these songs is less noisy, but there are no significant differences in terms of style. Consequently, The Stone's album from 2007 is a good work, not essential and sometimes a bit strenuous, but absolutely okay.