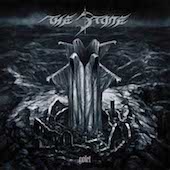 Let's turn back the clocks to the year 1903. No, The Stone has not yet been founded. Yet there is already a violent tendency in Serbia. From this it follows that 28 high-ranking officers storm the palace of the Serbian king during the night of 11 June. They kill and slaughter the king and his likewise unpopular wife. (A marriage is always a dangerous adventure and, aggravating the situation, in this special case she was 15 years older than him.) But that's not all. In order to celebrate and show their triumph, the revolutionaries throw the pieces of the hacked corpses into the garden. Of course, the public needs to know what has happened. Other countries, other customs.

Well, The Stone do not wallow in an orgy of violence. They prefer a more controlled way of proceeding, but they are also not in the mood to take prisoners. Golet is graced with a profound heaviness. It does not hold soft intros, acoustic intermezzos, female twittering or any other pretty useless nonsense. The album is based on a clear vision and does not look to the left or to the right. To avoid misunderstandings, this is no point of criticism. I am also fine with the fact that The Stone's form of black metal borders sometimes on death metal, because they do not put the focus on atmosphere. A constant vehemence characterises the album, only the second piece delivers a few almost cosmic leads. Anyway, the stringency of the implementation of their musical concept indicates the band members' high degree of conviction. This is not to say that each and every riff works in an excellent way. The excessive song patterns are also not always helpful and make it a little bit difficult to get access to the single pieces. Yet there are no throwaway tracks and it is no euphemism that the album works as a whole. In addition, it cannot be denied that main composer Kozeljnik has put his heart and soul into the music. This alone deserves respect, at least to a certain degree.

The robust production meets the international standard. It goes without saying that East Europe is no less developed region in terms of metal. These times are long gone. Furthermore, The Stone play the Slavonic card: five lyrics are written in their mother tongue. Frankly speaking, I don't understand a word, but I like the sound of the East European languages, in particular in combination with the bad mood of lead vocalist Nefas. The remaining lyrics are in English and one of these texts is inspired by old metalhead Shakespeare. Honestly, I don't think that The Stone and Shakespeare have the same artistic reputation, but this is another story. My topic is Golet. Just a little hint: its straightest track ('Pred Licem Novog Boga'), whose merciless guitar leads remind me of Mayhem's "Funeral Fog", is a good starting point in order to decode the compositional formula of the formation. The Stone cannot be deemed as a progressive band, but they also do not use conventional patterns. It needs therefore some spins to get familiar with the non-catchy tunes. But this time is well spent - and I guess it is more fun to listen to this energetic group than to throw bloody pieces of human flesh into a royal garden.