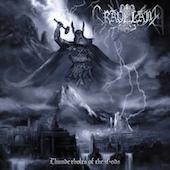 How long does the motto "more of the same" work? The answer of the Ramones would be 20 years and then you die. But quite apart from the personal tragedies of the band members - I miss them all, Joey, Johnny, Dee Dee and Tommy - and the legends about their allegedly monotonous album, they kept an eye on a certain diversity. The same applies for bands with a similar reputation, AC/DC, Motörhead (R.I.P., Lemmy) and Status Quo. Yet Rob Darken explores the outermost limit of persistence in a merciless way. Or did he already cross the border between persistence and unimaginativeness? He definitely found his style with Immortal Pride and Creed Of Iron, maybe even earlier. The new version of Memory And Destiny aside, Thunderbolts Of The Gods completes the first dozen of full-lengths. With regard to this amazing amount of albums and more than a handful of similarly constructed EPs, splits and so on, it is hardly possible to be blown away by a new album of Darken. Feel free to describe the songs on this album as predictable.

Nevertheless, I can see no necessity for Thunderbolts Of The Gods to hang its head in shame. The stylish artwork and booklet form the adequate package for the equally elegant musical content. Everything is the same as always. Excessive song patterns, female background choirs, melodic or fairly harsh lines, occasionally rumbling drums and the raw voice of Darken shape the soundtrack for our next school trip to Valhalla. Get up early so that you do not miss the bus, because Graveland are still able to offer good tunes. The title track finds the right balance between atmospheric parts and more valiant sections. Its lyrics deal with overwhelming spectacles of nature ("Red fire filled the sky / The land and sea trembled / Then rose the ocean high in the heavens"). Without question, Darken has still a weakness for dramatic scenarios. Although tunes like 'Chamber Of Wicked Tears' or 'Red Polaris' need a warm-up period, Darken delivers reliably. Without reaching for the stars, he manages his well known approach in a more or less masterly manner. (While looking at the big picture, the feeble outro can be neglected.) Too bad that he does not add some new facets to his pretty static composition formula.

If one still appreciates Darken's realization of Wagnerian aesthetics, there are no reasons to skip Thunderbolts Of The Gods. The different atmospheres - majestic and heroic, combative and resolute, ritualistic and dramatic - cover the entire range of epic emotions and despite the overlong configuration of the tracks, there are occasionally some dynamic moments. Furthermore, the adequate production puts the tunes in the right light, although I miss some suddenly screaming guitars which make clear that I am listening to a heavy metal album. Yet this is rather a question of the musical approach than of the technical implementation. I don't know how long Graveland will be able to walk their way without integrating new inspirations and influences. Nonetheless, one thing is certain. The Ramones play their three chords in heaven now, but I still enjoy "Blitzkrieg Bop" or "Rockaway Beach". The spiritual father (or great-grandfather) of Graveland, Richard Wagner, is - surprise, surprise - dead, too. He died in Venice in February 1883, but his music is still alive. If Darken's compositions will resonate for a comparable period, we know the musical preference of a great part of music consumers of the 23rd century. Frankly speaking, I'm in doubt about it.