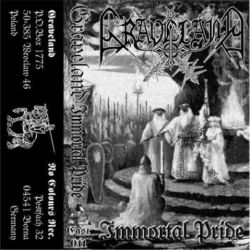 At the latest since the releases of albums such as "Hvis Lyset Tar Oss" or "Storm of the Light's Bane", we all know that also more or less confused minds can create great music. Of course, some scatterbrains will never write a good song. I do not want to mention names in this context. This would be unfair against Joey DeMaio. However, Rob Darken has talked a lot of nonsense, but his musical competencies remained unaffected. Immortal Pride supports this conclusion. It is a coherent album that conveys a medieval, ritualistic and sublime atmosphere. You are listening to a full-length which is characterised by symphonic parts. But due to their dark and almost religious aura, Darken's effort has nothing in common with the outputs of other groups that have an affinity for orchestral sounds. Dimmu Borgir has to stay out.

Seagulls squawk and majestic, slow melodies set in. Immortal Pride opens up the possibility of diving into a long forgotten time. The songs seem to be forged in fire. By the sweat of his brow, an old man has apparently produced them. Although the keyboards are of major importance, the compositions do not include any kind of easiness. The guttural voice of Darken as well as the primitive yet effective background chorals reflect the cold-hearted mindset of a resolute warrior. The epic 'Sons Of Fire And Steel' is the first of two monumental pieces. It reveals an exciting sequence of different melodies that flow seamlessly into each other. Its grandeur mixes with the feelings that are evoked by an approaching armed conflict. The battle begins with the outro - yes, the track has its own outro - after 19 well-designed minutes of pagan metal. The Valkyries come in and lead the fallen heroes to Valhalla.

Although the keyboards sound a little bit synthetic, the well balanced mix can largely be regarded as successful. In accordance with the musical approach, the production does not focus on an overdose of harshness. It possesses this certain archaic touch that fits the requirements of the artistic intention.

Compared with 'Sons Of Fire And Steel', the subsequent 'Sacrifice For Honour' is a miniature track with a playtime of "only" 16 minutes. Due to its higher percentage of more aggressive parts, the black metal past of Graveland shimmers through the compositional approach. Both short drum attacks and clumsy guitars leave their scent. Intensity is not missing and Darken's song-writing skills are demonstrated once again.

The final number offers mysterious keyboards lines. When they come to an end, fanfares herald the victory of the pagan warriors. The length of the outro - extensive seven minutes - seems to be too opulent, but we must view this piece in the full context of the full-length. I agree with the colleague who wrote that the album is more than the sum of its parts. Its concept works. So take the time to explore the fascination of Immortal Pride. You will not regret it.