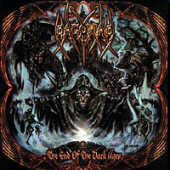 Type:
Release Date: 2002
Label: LSP Company
Genre:
1 Intro
2 Zul'Dahr
3 The Revelation Of Mallek
4 The Cauldron Of Death
5 The Bulls Of Itaros
6 Neflit, Demon From The Depths
7 The Warriors Of The Ancient Battle Of Zuljin
8 The March Of The Dead
9 The Holy Battle Of Vorneas
10 Epilogue

There are some bands who know how to properly utilize keyboards into metal and then there are some who just don't. Dagorlad are somewhere in between, and as this is only their debut I trust that they will eventually perfect their skill and soon forge their own distinct sound. Sounding painfully similar to contemporary masters of keyboard metal like Bal Sagoth, Cradle of Filth, and Summoning, Dagorlad's sound can best be described as a mixture involving equal parts of each, but with numerous and noticeable faults.

While most of the songs start off sounding very dark and promising they soon begin to slide into cheesy clichës and pitfalls that bands like Bal Sagoth are most famous for. Trumpet sounds playing those meek flat notes immediately try to create an epic feel, but without support and song build-up the result is just a cheesy melody played by a trumpet, with a heroic voice chanting meaningless words of bravery in the windy background. It's been done before, and plenty...

It is arrangement of "The End of the Dark Ages" that weakens Dagorlad's songs the most. There is virtually no plan or direction in the song structure, instead just a meaningless procession of ongoing riff and melody and, like a surprise bag, you never know what you'll get, sometimes it's good, sometimes bad, and in the end the only clear fact is that none of it fits together. If you like your keyboard music loud and upfront, outdoing and overpowering every instrument including the guitars than this could be for you, but it is certainly not for me.

Bottom Line: The metal world could do without Dagorlad, at least until they get better. These guys make Cradle of Filth seem godly.