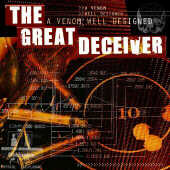 After a more blistering EP entitled “Jet Black Art”, The Great Deceiver is back with a more mature and fuller sound. Their creative edge mixed together with all of their abilities makes it a great listen.

It’s admirable that with the lack of unique and interesting bands popping up, that The Great Deceiver can actually pull it off. First off, they have their influences that you can pick out, such as hardcore, rock, and Swedish metal, but what they don’t do is sound like they are those bands. Second, it doesn’t sound like the band strived to be different. The Great Deceiver sounds sincere and natural, not contrived or derivative. They create a sound that even if taken over by another band, would still sound distinctive. It’s not often that a band can fit many different aspects that are important, instead of just one or two.

So what exactly do they sound like? Well, it’s a bit more difficult to answer than your typical Gothenburg band. With the more obvious influences of hardcore and Swedish death, there are more subtle upbringings such as Velvet Underground. The music is often very chaotic. Tomas Lindberg’s vocals sound a bit different than his days with At The Gates, or more recently The Crown. The use of electronics and keyboards does a lot for the band in terms of sound. It often brings out a more psychedelic atmosphere. The transition between the heavier parts and the softer sounds is nearly seamless. It’s great that the band has more of a melodic flare than they used to have. The use of screams and the not so friendly clean voice are complimenting towards each other, especially with the continually transitioning music. In the end though, the sound of the band is more of something to be heard, so that you can pick up more of the small details.

My main problem with “A Venom Well Designed” would be that after a getting halfway into the album you begin to feel like you get what they’re doing, and that the rest of the journey isn’t as important as it was when you began. The ideas are still there, but nothing to amazing. The material is still just as excellent as when it began, though.