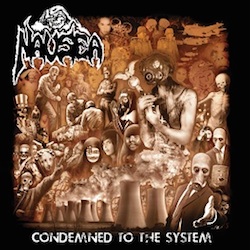 As much as I like the lyrics to this album, I think that the raw production sound made the sound kind of flat. This release is a mix of death metal combined with grindcore. This takes us back to the early days of hearing old Napalm Death via Lee Dorrian and old Carcass via "Reek of Putrefaction". No surprise that Oscar Garcia (Terrorizer) is on guitar/vocals to have us revisit these days of what early grind was like and the mixing/sound quality reminiscent of those band's grind days.

The music varies, but overall I'd say that it's a good blend between thick guitar chunks immersed in some grind frenzies which didn't exist in eternity with this album. They are not just blast beating galore, it's a mix and it really hit home with me, especially the efforts of both guitarists and the band as a whole. A 4-piece here and some solo frenzies via whammy bar plus arpeggios and screechy lead guitar work. The main focus here I think was to stay underground and dish out about 30 minutes of utter craziness.

Oscar reminds me a lot of Lee Dorian, just not as deep throat as he was. There isn’t a plethora of grind bands that I know of these days. Napalm Death turned more into death metal as opposed to pure grind of the early days. Nausea revisits the early days of these bands, not the band themselves, just a comparison when grind really became intriguing with the gruesomeness and noise it seemed to be like in the mid 80's to the early 90's. This band has been a mix of death/grind, but it's the first time ever hearing them.

Expect the rawness sound of the recording and you will hear the guitars blast bar chords mixed with tremolo picking style riffs. It's a definite good listen to. I found it on YouTube, this album at least and decided that it was good enough to own a physical copy of the CD. I like the brutality and rawness, the lyrics are also well sought out in topics that cover war, politics and religion. I don't agree with the religious aspect, but they have some pretty cool political commentary here as well as rage war of nowadays tyrannies that exist.

If you're into and like that death/grind raw sound to these genres, then Condemned To The System is definitely worth looking into. Grind is tough to find nowadays, and Nausea really hits home with good music alongside some fast riff frenzies and deep throat mixed with some screaming. So much of what I liked in the early days of grindcore, but they mesh the death metal aspect of the album, so you'll get both combined. The music is original and addictive. It's really under 30 minutes of pure awesome music!