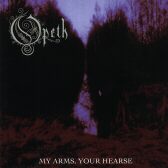 What diversity in metal, these guys used to play some great progressive music in this genre. A shame that they are no longer considered to be within the "metal" community, they've retired from it. Only 3 musicians on this one with a guest organist. Dark, decayed aura, but such beautiful reverence in the metal world. Songs on here just are so magnificently played without any noticeable flaws and such diversity in the musical and creative aspects. Maybe just 3 members here, but they sure do deliver great epic tracks.

The riffs are all over the place as are the tempos. Thick, heavy, brutal guitar then you get a break and there's an acoustic piece that delivers, lightening up the song overtures. Wow, I still am amazed on how well metal can be played with such melody. Guitars that are plain destructive in tone followed by throat that's low and bellowed. Then again, after this, there are clean vocals. The majority of the time Mikael sings in a death metal tonality, but he still can sing in a clean tone as well. Magnificent overtures and memorable songs that are quite innovative plus they're quite unique.

Acoustic guitars fluctuate on and off and some of the tracks have an overflow of this kind of guitar work, but most of the time it's distorted guitar work. The music contains melodies that stick in your mind gathering such an immense orchestra of metal. If you're a melodic death freak like I am, you'll love this one. Such great compositions that are totally original and can never be overplayed. Tempos are slow for the most part, especially during songs that are filled with acoustic guitars. They mix the tempos quite rapidly. Extreme progressive metal fits the genre quite beautifully. The topics that the band sings about include love, loss, sorrow, nature, death and occultism. As you can see, the diversity is not only with the music, but the lyrics as well. It's hard to decipher what Mikael is saying on each song. However, that doesn't mean that his efforts aren't without esteem. Songs are so much magnificently orchestrated. You won't find a better extreme progressive metal album like My Arms, Your Hearse.

The production sound for this time when technology wasn't making instruments and voice sound too "perfect". These guys actually have talent and the music is what fuels the soul of this album. All instruments are all in the proper mixing with nothing left out, not even the bass guitar. The metal just flowed on this release and it remains to be my favorite out of their entire discography. It's too bad that they are now no longer a metal band, they're progressive rock. There's 2 bonus tracks on here one cover song and an additional track entitled "Remember Tomorrow."

There is no other album like this in Opeth's discography. That is my opinion though, others can argue it and I come to the same conclusion: their best metal effort ever. No boredom, no lack of innovation, no melodic guitar that is unimpressive. This album is just something that you can easily get into if you like this genre of music. Don't expect anything but pure melodies some heavy some acoustic like I've described. A monumental masterpiece, My Arms, Your Hearse is just too perfect and never played out. If you don't own this one, pick it up and form your own opinion of it. If you're expecting utter brutality, there's shades of it, but not entirely.

I am! and with Opeth you can never seem to go wrong. This time the band offers us a concept album where the lyrics take the form of a ghost story and the music was made around those lyrics. The lyrics are brilliant and the music is brilliant. How could you expect anything less from this band?

Again Mikael and his expert panel of musicians both soothe you and brutalize you all in the same record and most of the time in the same song! They have the uncanny ability to write long and epic songs and keep them interesting the whole way through. This album is a little more death oriented than Morningrise, but there are no complaints here. Mikael's clean vocals are still intact whereas his screams become a little bit more sinister in their devilery. The album was produced at the now infamous Fredman Studios by now infamous producer Fredrick Nordstrom, and remains a classic that every metal fan should have in their collection.