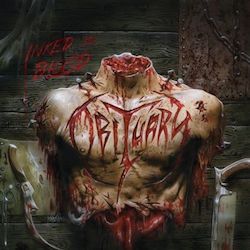 ::   ::
Type: Full-Length
Release Date: October 28th, 2014
Label: Relapse Records
Genre: Death
1 Centuries Of Lies
2 Violent By Nature
3 Pain Inside
4 Visions In My Head
5 Back On Top
6 Violence
7 Inked In Blood
8 Deny You
9 Within A Dying Breed
10 Minds Of The World
11 Out Of Blood
12 Paralyzed With Fear
MetalBite on YouTube

This one is no Cause of Death, it is merely average, nothing inherently special or worthy of admirable praise. It's not a total dud or bore, that would take out the effectiveness of the album. I neither think of this release as a waste or total gem, it lies flat in the average death metal category. It's nothing that's extremely extravagant musically, but you know it's "them", just a somewhat more modern form of "them." These guys are notorious for creating slow, demented musical lines with vocals that are gruesome, but on here you get more of a higher end form of John Tardy, not the low-end style that was self-evident in the earlier days of the band. You definitely get the brutal riffs here though.

What distinguishes this one from their prior releases have to be felt in the production sound quality as well as the vocals/music. Their use of thick guitar chords are a self-evident truth in pretty much all of their releases, however, the quality in the riffing here isn't markingly high. They are less creative on this one which would lie in the musical department. I didn't hear anything astonishing. It just seemed like a repeat of guitar riffs and sub-par mixing quality. The atmosphere is still dark, but would've been better if Tardy's vocals were more brutal. They seemed to lack spunk in their efforts and their lead guitarist is no James Murphy. He tries to capture that effect that Murphy had on the band.

This is a listenable release, however, don't expect anything that is glorious or exceptional. It seems like as a band, they've lost effectivenes. I mean to say that the music is average and the vocals are still all right, but the album's overall efficacy isn't there. They're just playing mostly bar chords with some tremolo picking going on there. The concept here is still Obituary's death metal sense which distinguishes them from the rest of the death metal community, but as far as something to get a physical copy of the CD to support the band is in question. I mean I'm glad that I got a copy of this album, but the younger generation of death metal fans may view this as just as being repetitive as well as slow.

My contention regarding Inked In Blood is that it does have its moments where the music grasps you, takes you into the abyss of the grimness, and aura that reflects a bit of the old era. A less than handful of original members are left in the band, but still, I think that the songwriting could've been a little bit catchier. There wasn't anything that flat out grasped me in an extraordinary sense. I think that their unique style remains, just the music wasn't very catchy or noteworthy. They just put out mediocre guitar and I'd say some decent guitar leads echoing out there, but none that could ever top that of James Murphy's. That guy was in a league of his own when it came to leads!

No, this isn't a monumental or hallmark performance musically, I thought it just a mediocre sensation of Obituary's output. Yes, there are some fresh and good pieces there and my expectations weren't exceptionally high here, but what I heard on this album as I put it to study on was that it's decent, yet just mediocre. Tardy's old style of vocals isn't there, it's simply a higher end version of him, though you do know that it IS him. The production quality was just bland in a way. I think that it could've been better, though it struck me as just being flat-sounding. You'll get some of Obituary's old tendencies but with a more modern tinge of them.