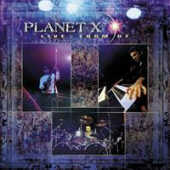 After only one debut release, it looks like Derek Sherinian’s (ex-Dream Theater, ex-Platypus, Alice Cooper, Kiss) prog/fusion super group is already at it again. Somewhat surprisingly, it’s a live album entitled “Live From Oz” and it was all recorded during their 2001 Australian tour. Featuring the musical elite, Virgil Donati (drums), Tony MacAlpine (guitar), Derek Sherinian (keyboards), and guest musician Dave LaRue (bass) are about to take you on a progressive ride of mild entertainment.

Unfortunately, I’m sure many of you already know what to expect from this. Planet X is a band that pushes their limits to showcase their abilities, and that’s exactly what they do on “Live From Oz”. The music is almost always doing something that is complex on some level, but it’s not always a shred-fest. This is a good thing, as it allows the band to bring in melody and groove, and also makes the musical landscape very spacey. At times it really comes across as improvisation. In general it has one member, usually the guitar, throwing around his playing abilities while the rest of the band creates a purposeful and useful backdrop. Each member does get to showcase their talent and ability in each individual song though, but more particularly in the individually tracked solos of all three of the true members, Sherinian, Fonati, and MacAlpine. There isn’t much more to say about “Live From Oz”. That’s about all there is to say about this album. It’s a very open sounding album that has virtuoso musicians playing their very best, but on “Live From Oz” it raises some problems.

With most any prog/fusion band made up of people who are amazing musicians, you get something that is self-indulgent. This really just builds up the pretentiousness and turns into sheer boredom. There is only so much unstructured instrument masturbation that a person can take, which brings me to my next complaint. The band really doesn’t have any direction to it. It’s just this huge plane of musical ideas tossed into one, moving from one idea to the other. Sure they are great musicians, sure they can throw in melody and groove into and between their shredding, but without the ability to compose something well that has some type of direction, its meaningless. Planet X only has about half the field tackled.

Bottom Line: I’m sure people who go for this type of thing will just fall more in love with Planet X, but for the rest of the world, it’s a meaningless record that can be ignored.