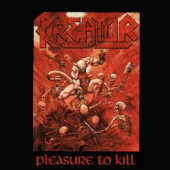 During the last years, Mr. Petrozza has begun to stylize himself as a politically interested, reasonable guy, socially competent and thoughtful. A brainy man who knows more than the somewhat narrow-minded heavy metal universe, a man who has something to say. Something very important, of course.

Well, that's definitely fine and everybody has the right (or even the duty) to keep a close eye on his personal development. Nevertheless, whenever Mille opens his mouth in order to vitalize our poor brains with a very thoughtful message, I have to think of lines like this one: "My only aim is to take many lives, the more the better I feel" or that one: "He eats the heart of your wife and rips her cunt inside". I know that we have to separate the artist from the person, yet this contrast always irritates me. Frankly, the entire lyrics of Pleasure to Kill are nothing else but a pile of shit (and the artwork is not much better). But here comes the good news: lyrics are absolutely irrelevant as long as we are talking about unleashed thrash metal. Pleasure to Kill contains exactly this music and furthermore, it holds a couple of excellent compositions.

As soon as the deceptive intro fades away, three berserks start immediately to demonstrate their Pleasure to Kill their instruments. Mille is ahead of the pack and spits out the nonsensical lines with a maximum of hate and anger. Ventor, who delivers the lead vocals on three tracks, makes sure that there is a certain variety. His voice sounds less hateful, but more masculine and more controlled. Anyway, both singers convince with a highly aggressive performance. Anything else would have been inappropriate in view of the musical content. Kreator use the heavy artillery. Pleasure to Kill is more vehement than "Agent Orange", it sounds much more brutal than "Zombie Attack" and it delivers a rougher form of violence than "Infernal Overkill". The songs are characterized by high velocity, stormy riffs and flattening leads. Furthermore, the smell of decay fills the air. Although I am not a fan of the artwork, I must admit that it reflects the atmosphere of this milestone of German thrash metal very well.

Kreator manage the challenge to integrate tiny melodies without hurting the brutality of their songs. "The Pestilence" holds a short, almost melodic part from 4:45 to 5:33, but even the here presented melody line does not lack of a specific gruesomeness. However, violent sections dominate the album. A small number of sequences borders on chaos. "Carrion", for example, is kicked off by a noisy solo. Shortly afterwards, hectic guitars are accompanied by equally nervous drums and both create a violent staccato. Nevertheless, the band does not lose control. Instead, the three-piece delivers some jewels of extreme thrash. Both the title track and "Riot of Violence" score with surprisingly catchy choruses, "Ripping Corpse" impresses due to its sheer fury and the closer "Under the Guillotine" leaves a final trace of devastation with regard to its piercing guitar work and the simple yet sustainable chorus. "The Pestilence" wins the award for the most epic battle. But it goes without saying that I also want to provide you with the titles of the downers of this work. Here they are: ---- . That's not much? Sorry, but there is nothing more to say in this context. Only a real human competence center, Mille for example, would be able to add an intelligent comment.

Don't get me wrong, this album is cool, it's awesome, it's heavy, it's one of the first albums to mix the aspiring new death metal and thrash. This album isn't BAD, but it's not flawless or "amazing" at all I'd say. I really do enjoy this album but at the same time I'm not that big on this at all.

I absolutely adore tracks like 'Ripping Corpse' (especially that song, it's my favorite on the album), 'The Pestilence', and 'Under the Guillotine'. Mostly every song is very good and great. But my main issue is how sloppy everything is. The skank beats, pretty much a lot of the drumming is half off tempo, the guitars fail to catch up with the drums at sometimes, and a lot of the time the vocals are just shouted out randomly instead of being structured and placed accordingly throughout songs as they should be. Some people like this album mainly because it's messy. It appeals to them because it has a relentless pummeling evil sound, and I totally get that; but in my opinion I don’t think it's all that great. Endless Pain actually used the "messy" type of shit in a good way, on that album the messy vibes feel good and it just feels right, like it should be there, where on Pleasure to Kill it feels forced and not fully processed.

Aside from all that which is the biggest issue for me, the songs are good. As I said before my favorite is 'Ripping Corpse'. It has an awesome riff followed by skanks and fills on the drums, and Mille's vocals sound heavy and plain evil. So good. On the other hand, tracks towards the end of the album heavily decrease in quality. The guitars lose their heaviness and the riffs get stale, and the drums sound completely different as they did on the first half of the album. Especially the snare, oh god did the snare loose it's greatness. Makes me sad. Can't stand that soft gross snare. Those songs are just alright but not as enjoyable as the first few songs, not at all; and that's for sure.

I do like this album, but I find myself not being fully pleased every time I listen to it. I'm not a huge fan of how unorganized it is. I would enjoy it far more if it wasn't so much like the way it is. It's pretty hard to explain for me. I do love this album, but I also just don't like it compared to other albums. Terrible Certainty is far better than this. Overall this is just a good album. It's cool but needs some fixing up.

Around the time California's Slayer released the seminal "Reign In Blood" on the other side of the globe, Germany's Kreator released a monstrous album of their own, entitled "Pleasure To Kill". The fierce, unrelenting songs on this album would become a blue print for what would become death metal.

Despite being released sixteen years ago, "Pleasure To Kill" is still brutal by today's standards. The calm guitar/keyboard intro is the only moment on this disc that will give your neck a break. In fact, the latter half of the intro is completely misleading, because just when it gets almost, dare I say "pretty", the sheer fury of 'Rippin' Corpse' blasts through the speakers like a wild beast that has been caged for far too long. This song is a great introduction to what awaits you; furious guitars and drums, along with a pounding bass line and spiteful vocals. Next up is 'Death Is Your Saviour', which if anything, will kick your arse even more than the previous song. Despite its ferocious pace, this track is very memorable and contains some great riffs that will stay in your head. The title track is my favorite on the album and just rules any way you look at it, this song is a classic if I've ever heard one. I could go on and on and go through every track on this CD, but it would be pointless, as they all kick your arse. Besides the ones I've mentioned, other standouts include 'The Pestilence', 'Command Of The Blade' and album closer 'Under The Guillotine'.

Overall, "Pleasure To Kill" is a great album, and to me it is the definitive Kreator album. Even though this is overall a very aggressive thrash album, there is certainly some "death metal" elements in here as well. Many of the songs are more aggressive than anything I've heard from this time period, and still knock you on the floor, even today!! Once this album sinks into you and becomes part of your subconscious like "Reign In Blood", you will start to notice just how large of an influence this band and this album, in particular had on the current death metal scene. While the music itself isn't very technical by today's standards, it was very extreme when it was released, and is played with conviction, heart and energy, which are a very important part of making a great record. That is a big part of what makes this CD great, Kreator sound like they are having fun and like they believe in and enjoy the music they are playing. The only thing that keeps this album short of thrash perfection is the production, which isn't bad, but not great either. All in all, this is a great album by a legendary band. A must for anyone who likes aggressive, no-frills thrash/death metal.

Bottom Line: A timeless metal album. This album is a true gem in the metal world, and fans of thrash/death metal will not be disappointed, you will be headbanging the whole way through! You need this!