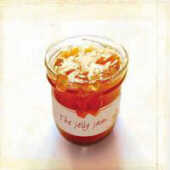 From what I can gather about this more obscure progressive rock band known as The Jelly Jam, it came together under the three remaining members of Platypus – guitarist/singer Ty Tabor, bassist John Myung, and drummer Rod Morgenstein - after keyboardist Derek Sherinian left the band. Fans of Platypus can more or less rejoice, but keep in mind that The Jelly Jam are different than Platypus, in the sense that their self-titled debut is more of a straightforward rock ‘n’ roll album than anything. Disappointed by those happening or not, get ready because these remaining members are ready to let their ‘70’s influences inside them come alive and thrive throughout their modern take on classic, progressive rock.

“The Jelly Jam” is an adventurous progressive rock album, but all while staying in the same field of mind throughout the album. What this does for the band results in a thoroughly thought out, consistent album. The songs flow together unbelievably well, the atmosphere is unbroken, and the performance is top notch. What less could you expect from such musicians, a group of people whose chemistry together is so fitting for this type of music? They don’t rely on instrumental theatrics to entice the listener. The Jelly Jam put their support under strong song-writing composition, well thought out guitar riffing, tight drum backing, and convincingly emotional vocals. They don’t need to shred on guitar or play as fast as possible on drums to convince the listener of their expertise. The Jelly Jam has their act together and they’re perfectly on track.

The sound of The Jelly Jam’s progressive rock is very spacey and open, with a mixture of harder hitting passages to toss up the moods of the songs. The spacey sound comes from the light guitar work with an underlying bass groove. The gentle chord progressions or the simpler individual note work is very hymnal, and the bass’ more riff-oriented take on the supporting rhythm plays a large part in this album. John Myung speaks loudly with his performance on this record, due not only to him being audible, but because his material is excellent. The heavier moments are achieved by memorable, rocking riffs and the occasional wild solo that seemingly arrives at just the right time. To help with all moods that The Jelly Jam transcend is vocalist Ty Tabor, whose Beatlesque vocals are very soothing over the music. Not one member of the band is lacking in any of the major factors of the music, and their chemistry as I said is very fitting and you can tell by the music.

Bottom Line: For anybody interested in a modern take on classic ‘70’s rock, The Jelly Jam is one of your best chances at not being disappointed.