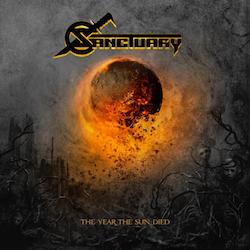 It's basically no secret that Warrel Dane is one of my favorite lyricists on the planet, not to mention one of my most admired vocalists in all of metal and beyond. That lovely little fanboy drainage aside, I love Sanctuary about as much as I do Nevermore, but I do admit to more than a little trepidation when I heard of Sanctuary reforming. Sure, nostalgia grabs me like it does any aging metal fanatic, but I immediately harkened back to the early days of Sanctuary and that shrieking high-pitched scream Dane was noted for then. Many was the time I'd see Nevermore live and yell out for "Die for My Sins," only to have a laughing Warrel retort, "Did you bring any fuckin' helium?" Oh hell, it was worth a shot....

Finally (!) the latest Sanctuary album is upon us (the first in 23-years) titled The Year the Sun Died, which is aptly titled if you're at all familiar with Dane's wildly introspective lyrical prowess. After taking it in for a full once-through, my first initial reaction was, "Well, it's...Nevermore, really." There are absolute moments of complete Nevermore-esque patterns, and anyone that says different simply isn't familiar with either band and the natural progression from 1991's Into the Mirror Black into 1995's debut, Nevermore. The first Sanctuary release in '88, Refuge Denied, was a high-pitched, speed-laced entry into the Seattle quintet's tempestuously brilliant power metal that suffered only from a muddy Dave Mustaine mixing effort. When Mirror hit a couple of years later, I definitely heard the shifting in overall tone that would eventually morph into Nevermore's self-titled debut when Sanctuary split amidst rumors of half of the camp wanting to 'go grunge.' While Nevermore possesses one of the single greatest catalogs I've ever had the privilege of hearing, that period is over.

Herein lies my quandary: I absolutely love this album. It's everything that I am attracted to when it comes to personal viewpoints on the unavoidable descent of mankind, be it by technological advancements or old-fashioned arrogance and idiocy. Warrel Dane is an unequaled master when it comes to this type of writing. All of this said, I'm puzzled as to why Warrel and bassist Jim Sheppard felt the need to reunite Sanctuary to produce an album that sounds so much like Nevermore it's practically a cover band, right down to founding guitarist Lenny Rutledge's blatant, if spot-on Jeff Loomis riff prowess. Don't misunderstand me, Rutledge has his own definitive sound (no one could ever fully replicate Loomis' signature sound and style), including some really really good solos, but the indelible tonal quality throughout the album simply screams Nevermore. So hopefully you see my point here - I really enjoy this music, but I'm more or less confused as to which team to root for I suppose.

So let me get on with the album itself. The single, 'Arise and Purify,' is a strong opener, utterly pregnant with that familiar Dane tone that bellows and commands subservience. As is the nearly-perfect standard with Nevermore (I choose to forget that horrid Kelly Gray butcher job), the production is sharp and crisp to the point of forcing the foundation to shake underfoot. There's a sentimental fluidty to the sound that always impresses me; I hate to keep saying this, but if you like Nevermore's sound, this album will not negatively sway you. Now and again, a track will come and dismiss the aforementioned tone and throw a musical wrench into the fray, evident in the track 'Question Existence Fading.' I also really like 'I Am Low' with its incredibly somber Metal Church intro and verse riff that calls upon 'Watch the Children Play.' This is the one track that seems to stray from the formula, completely revisiting the Into the Mirror Black aura that is further complimented by a quick and resonating guitar solo. The dual attack of Rutledge and Brad Hull (formerly of fellow Seattle natives Forced Entry) here is an all but forgotten art form these days, but it's nestled nicely in the evenness of the track.

I will say that by the time 'Frozen' literally pummels out of the stereo I'm smiling and nodding my head to that oh-so reminiscent gallop I've been entranced by for the last twenty-five years with these guys. The vocal melody is both forceful and resounding, which is typical for Warrel Dane when he needs to get across the point with all of the gentility of a speed-laden Venom fan in the R&B section of your local record shop. These are also some of my favorite lyrics on the record; I'm always ready for a truly encompassing experience when I engage some of Warrel's lyrical offerings. It can be exhausting and enlightening, but you could definitely be a different person if you truly understand what he says and why he says it. In short, very few can do what this man is capable of doing, and being backed by incredible musicians throughout his career has only enhanced the experience(s). As he's great for doing, Dane uses vocal pattern magic to dictate the flow of any song, which is wonderfully presented in 'The World is Wired.' As his vocal melodies shift and augment rather indiscriminately, the music then tends to follow with enchanting peaks and dips, creating a musical see-saw effect that keeps the music from ever lulling into boredom or bleak simplicity. While many people may long for the King Diamond-like screams from the first album (where not even a trace is found herein), I personally feel Dane's best work is in those haunting lows and double-tracked harmonies that make him one of the most underrated singers out there. For the special edition of the CD, the band keeps up with a long-standing tradition of covering some classic tracks by amazing bands from the 60's. The cover of the Doors' 'Waiting for the Sun' makes me wonder just what would have transpired had Jim Morrison and Warrel Dane been locked in a studio together for a few hours. Provided they both emerged alive and relatively sane, it might well have been majestic poetry crossing borders and genres with indelible ease.

As for the band, this is a Sanctuary that is new and, some might argue, vastly improved with the times. The age of the "upbeat" thrashy power metal seems to be over, or at the very least hidden in the shadowy corners of the genre where only local clubs and haphazard Mp3's might find occasional rays of light. The dark, brooding, almost grooving style adopted here is a somewhat fresh slant on an older band. Gone is original guitarist Sean Blosl, but the main frame of the band still finds itself viable and relevant. In the grand chasm of nostalgic reunions that seem endless today, Sanctuary might be one of the more positive additions to that ever-growing list, provided you know just what to expect.

The Year the Sun Died may well end up on my Top Ten list at year's end, and rightfully so. There is a resilience and staying factor that doesn't allow for casual engagement. At the end of the day (and about the fifth listen) I find more than a few nods to something not-so-'Nevermoreish', and that's always a plus. I'm glad that the guys got past their differences and found the magic once again, and quite magical this record is all over if you're so inclined to take on the poetics within.