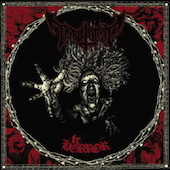 Tribulation is a band that transforms itself much faster than I can think. This results in the fact that their second work gave me an ambivalent feeling and I was not interested in their following efforts, because the way ahead was already charted. But their debut left an enormous impact, at least in my living room. Due to the great potential of the band, it still baffles me that the Swedish horde released its first work on a label from Singapore. Did nobody in their homeland - or at least in Europe - realize their great abilities? Okay, my boss does not realize my great skills as well, but this review does not deal with that physically fat yet mentally thin guy. (I mean my boss, not me.)

Aptly titled, The Horror spreads a nightmarish aura. All tracks are totally reckless, and many combine furious and morbid elements, but the raging sections definitely prevail. The songs cannot be easily categorized. It's a mix of all relevant extreme sub genres, black, death and thrash metal - in this order. The high level of energy has the highest priority and ensures the homogeneity of the debut. The listener faces the eye of the storm as soon as the opener breaks loose. Its solos border on insanity and King and Hanneman (R.I.P.) would love them if they could listen to them. But the solos are just one building block, it happens a lot during the tracks. They are equipped with the right number of breaks without being progressive. On the other hand, the tempo changes, the slicing guitars and the omnipresent force guarantee an exciting listening experience. Tribulation do not only concentrate on high velocity, but they have integrated hyper-fast sections in each and every song. This leads to nine high class eruptions which profit from a brilliant sound. The voluminous guitars pave the way, but they do not sideline the hateful voice or the thundering drums. No doubt, listeners who are not used to consume metal, will describe this mix with words like apocalyptic, hellish and brutal.

Speaking of brutality, we may not forget that these dudes originate from Sweden. This means that their DNA is a very specific one and they are not able to present brutality for the sake of itself. They also have great technical skills and therefore they play very tightly, precisely and powerfully. And, even better, the group does not run out of ideas. Quite the contrary, the longer The Horror lasts, the better its songs become. The outbreak on the eighth position, 'Seduced by the Smell of Rotten Flesh' starts with flattening guitars, but a high-speed eruption is following immediately. Great riffs and hammering drums characterize this relatively long outbreak of hate, but there is also a contrasting section that holds some gloomy keyboard. All different parts go hand in hand and its spooky outro seems to be an excerpt of a feast of vampires in an old castle. (Please send me an e-mail if vivid imagination needs to be treated.)

The closer convinces with a fantastic structure, too. It delivers an example for those songs where, all of a sudden, a pretty melodic guitar line leaves the orgy of brutality behind and adds an unexpected ingredient. No doubt, Tribulation used a great recipe when penning this diabolic work and it remains a pity that they threw their successful formula away after finishing it. I guess they belong to these overly ambitious musicians who always feel the need to say that they hate to record the same album twice. But who has ever asked me whether I agree with that attitude? I wish The Horror would have a very similar brother, but its kinship rather consists of dubious creatures.