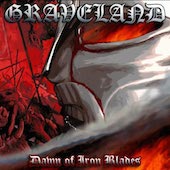 Type: Full-Length
Release Date: 2004
Label: No Colours Records
Genre: Pagan, Viking
1 Iron In The Fog
2 Semper Fidelix
3 Immortal Bloodline
4 To The North Of Rubicon
5 Crown Heroic My Departure
6 While I Ride With The Valkyries
MetalBite on YouTube

Whenever it comes to Graveland, I am in a miserable situation. To me, all their albums sound more or less the same. Okay, this does not include their early works. The uniform stream of mid-paced anthems began with Creed of Iron after the transitional Immortal Pride album. When I think about all these releases, maybe with the exception of Fire Chariot of Destruction, they coalesce with each other, generating endlessly plodding rhythms which are accompanied by more or less effective guitars. Not to forget the wolfish vocals of Rob. Even the productions do not deliver specific features. This mix is not bad, don't get me wrong. However, the question remains why Darken loves stagnation. Dawn of Iron Blades, the album which is in the focus here, starts with a painfully generic opener. Its pretty tired guitars fail to set milestones and so the song just passes by. Of course, monotony is part of Graveland's business model, but exactly this circumstance makes it all the more important that the guitar lines boast with charisma. Thank Wotan, the next songs show a better appearance.

Both "Semper Fidelis" and "Immortal Bloodline" rely on a more combative approach. The latter gives the well-known female background choirs - or billowing keyboard lines - a pretty salient role. Darken wallows in his kind of Wagnerism, but I don't think that Richie's descendants appreciate Graveland's simply designed music very much. And to be honest, even without the genetic material of such a musical genius, I must admit that Darken's way of proceeding suffers from predictability, not only in view of the mostly missing breaks. No doubt, he reaches his top form whenever he is able to create a menacing atmosphere, for example during the verses of "Crown Heroic My Departure". But at the end of the day, Darken is not able to add a surprising element every now and then and this is slightly sad. I don't speak of a dubious form of evolution and I like his stubbornness, but to enrich a stable approach with one or two previously unknown aspects on a new longplayer is not necessarily a bad idea, to express it mildly.

The album in its entirety is solid, no doubt about it. The production has a natural touch and shines with a good balance. A few number of apocalyptic wolf screams disturbs the silence of the long and slow music river which flows through my living room, but most of the time the songs do not present any unexpected details, if I neglect that a guy called Garhard III has written the lyrics for exactly three tracks. This number is only logical in view of the name his mother gave him... However, this fun fact has no further implications. Thus, the only surprising detail is that an unknown bungler did not print the name of the second song correctly. "Semper Fidelix" is naturally nonsense, "Semper Felix" is the right title and, needless to say, this track constitutes the climax of the album. Thanks to Darken for this small gift and don't worry, my Polish friend. I will stay true, even though I realize your compositional limitation. Nevertheless, almost each and every Graveland album offers good entertainment and the here sharpened iron blades do not mark an exception.