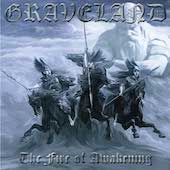 Type: Full-Length
Release Date: 2003
Label: No Colours Records
Genre: Pagan, Viking
1 We Shall Prevail
2 Battle Of Wotan's Wolves
3 In The Sea Of Blood
4 Die For Freedom
5 The Four Wings Of The Sun
MetalBite on YouTube

Rob Darken, Graveland. Do I have to say anything else? Ah, there are some pretty young and innocent guys in the last row who have never heard of this Polish follower of Richard Wagner, the classic grandmaster of monumental scenarios? Okay, I accept my inevitable fate and will provide you with some information concerning The Fire Of Awakening.

Of course, Darken has not modified his style. This dude must be a lucky man, because he seems to be his greatest fan and with that said, it comes as no surprise that The Fire Of Awakening sounds exactly like its predecessor and this predecessor sounded exactly like its predecessor and so on. Darken's creations sound elegiac and majestic. I bet that Wotan and the other divine authorities in Valhalla nod their heads benevolently. Endlessly floating mid-tempo rhythms create a pretty mesmerizing aura. "Think big" summarizes the thoughts of Darken well and just like his German idol, he designs excessive, opulent panoramas. Five songs with an average length of nine minutes are usually hard to digest. Yet this configuration is deceptive. In fact, those who do not listen very closely to the album might be of the opinion that The Fire Of Awakening presents only one song. However, we keep calm, because the lack of variations and the susceptibility for repetition are well known elements in Darken's artistic work. But mysteriously, this does not indicate a low quality of his albums.

Despite his formulaic approach, the Polish wood gnome is able to pen an album that casts its spell upon the listener. Some dramatic sections, for example evoked by the celestial choirs that show up in 'Die For Freedom', do not fail to have an impact. Darken himself contributes some nice vocal parts as well. Every now and then, he delivers some raw screams that sound like he is spitting fire. I still wonder that my living room does not start to burn, but this is not of general significance. Regardless of the vocals, one has to mention the rough, medieval charm of the melodies. Yes, they are all cut from the same cloth, but this is not to say that they suck. They are rather like the restless sky on a dark and stormy winter day. Constantly slightly depressing, but always a tad changing due to the wandering clouds.

Is there anything left to say? No, the guys in the last row seem to be satisfied, not at least because of the neither outstanding nor flawed sound of The Fire Of Awakening. I admit that the snare drum could be a little bit more powerful, yet this does not affect the overall impression. Indeed, the entire "hardware" of the album is convincingly designed, just take a look at the stylish (yet slightly kitschy) artwork. Thus, things are quiet easy. Those who like Graveland's symphonies in general will also like this album - and vice versa.