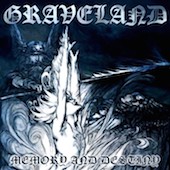 I know that reviews need a certain length to be accepted. Generally speaking, I share this point of view. Nevertheless, some albums can actually be described sufficiently with a few words. In the case of Graveland's Memory and Destiny, these words are "epic", "heroic" and "majestic". The gigantic gatekeeper of Valhalla has opened the doors and lets us in.

The album puts the focus on mid-tempo and atmosphere. The sounds of crying seagulls and breaking waves generate a natural aura and the almost monotonous background choirs add the suitable degree of grandeur. Instead of delivering surprising twists and turns, Rob Darken prefers to offer mesmerizing sound collages. The dense production underlines this approach. It is transparent, heavy and encompassing. Everything is well-balanced with the effect that the guitar does not play the leading role. But it also does not fall by the wayside. Instead, it is on a par with the keyboards that contribute a symphonic touch. All in all, the production guarantees an intense listening experience.

Of course, those of you who do not like Darken's approach in general will hate this work, too. The songs of Memory and Destiny could be leftovers of Creed of Iron, not in terms of quality, but in terms of style. Honestly spoken, I cannot say that this fact bothers me. I rather think that reliability is a strong value and it is good to see that Darken is of the same opinion. Consequently, the here presented five tracks form a strong unit. It is remarkable that the album has neither highlights nor low points - the songs flow seamlessly into each other and the overall impression is decisive. Their sprawling configurations create an almost celestial feeling and the slow-moving melodies combine heaviness and persistence in an exciting manner. The rare breaks are effective and despite their lengths of nine minutes and more, the single pieces are not too long. Darken does not enter the stage with insubstantial tunes and his in-depth understanding of efficient harmonies is one of the advantages of this work. At the same time, the raw and growling voice reminds us of his black metal roots. This means that Memory and Destiny does not reveal a polished or nice side of Graveland. The album has enough metallic elements to attack the listener with its subliminal violence and mythical elements ("Jewel of Atlanteans") are also not missing.

I have to mention a further element of Graveland's sound. It goes without saying that Memory and Destiny conveys this typical archaic aura which has become a trademark of the band during its career. Endless caravans of armored warriors pass by in front of the inner eye. They walk a burdensome path, but their grim faces express the determination to achieve their goal. No doubt Rob Darken himself has already reached his aim. Memory and Destiny is not the best full-length of Graveland, but it reflects the musical vision of a man with clearly defined ambitions. Therefore, I recommend this album to all of you who like medieval anthems without fairly ridiculous Viking choirs.