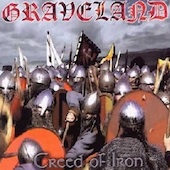 Every now and then it is time to review some songs of Graveland. Here I ask for your attention for Creed of Iron, a strong title - inspired by an eponymous book - for a metal album and this is exactly what this full-length offer: metal. What I want to say is that Graveland do not focus on a specific form of our preferred music. It's no black metal and it is although no (typical) Viking metal, because stupid choirs of drunken men and campfire romanticism are missing. Even better, any form of commercially interesting details also does not pop up. Rob Darken focuses on his own, pretty idiosyncratic type of metal which is tough, majestic and powerful. Sometimes the material could be classified as "Ancient Rome Metal", because the omnipresent archaic touch meets triumphant glory. But who am I to invent new sub genres?

Although the songs flow more or less constantly slowly, they have the necessary drive. Exciting parts like the long instrumental section at the beginning of "Ancient Blood" demonstrate this impressively. This section also shows that the material does not lack fantastic melodies that never bow down to the mainstream. The melodic lines are very painstakingly chosen and fit the combative, heroic and antique concept perfectly. By the way, it is the same concept that already shaped later outputs such as Memory and Destiny and it is also not too far away from the basic idea of Immortal Pride. But this form of self-quotation doesn't matter. Even though the music appears comparatively formulaic, it spreads fascinating and irresistible vibes. Just dive into the large-sized intro which seems to herald victory after a battle with heavy losses.

Of course, Creed of Iron does not house the most adventurous music. Darken loves to celebrate his mostly effective leads and he hates any kind of hustle and bustle, but he keeps an eye on a certain number of breaks and tempo changes (from slow to slower and back) as well. He has created intensive and coherent hymns that deliver the perfect soundtrack to close your eyes and travel back in time. The ironclad sound transports the listener directly on a medieval battlefield. I am happy that I was not born in the Middle Ages, because heavy metal had not yet been invented. Nevertheless, if I can combine both, I like to experience the Darwinian component of these rough times and the compositions of the Polish lone wolf expresses this element very well.

Darken, his lyrics and his liner notes have one thing in common. They are politically dubious. But I don't intend to play the moralizer. Ideology is one thing, good music is something different and I have no doubt that Creed of Iron is filled to the brim with robust, resilient and martial songs. By the way, these songs do not only come into its own due to the vigorous guitars. The intelligent and well measured use of the synthesizers constitutes an important factor for the formidable overall impression, too. Not to mention the uniform yet raw and expressive vocals. Putting all these features together, there can be no doubt that this Creed of Iron knows no fickleness, no disloyalty and no despondency. Instead, it rams its decorated spear into the ground and makes clear: this music is from heroes for heroes (and in exceptional cases for non-heroic dudes like me).