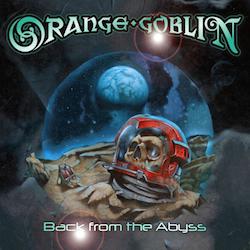 Orange Goblin has the power to perform strong stoner styled metal. The music is catchy and rollicking in nature. It is also very rooted in the stoner metal genre instead of doom, which makes it sort of distinctive in sound. The band seems to have a lot of fun performing these tracks, which is impressive.

Even though I haven’t heard this band live, I imagine this passion would translate well to this style of performance. The songs are very memorable and feature licks that one will want to remember. The problem with this music is that it would begin to sound the same and there certainly isn’t the same impact to be found with this album as with A Eulogy of the Damned. At the time, that album stormed out of the gates and completely captured my attention, while this work only captures my attention in a semi fashion. The very first song Sabbath Hex seems to be the most memorable of the bunch and get things off to a good start. Though the music is uplifting, I still felt more involved in the band’s Eulogy of the Damned.

This really is music to head bang along to, though and many of the moments of this disc made me want to do so. There is simply a pure enjoyment vibe to the band that is hard to pinpoint, but so much of a joy to listen to. The band is about as fun to listen to as Electric Wizard and though I’m comparing them to a doom band, both outfits seem to have an equal amount of fun producing their music. Fans of the band’s previous outings will no doubt enjoy this too, even though there isn’t much new to be found here. Back From The Abyss is still an enthusiastic good time.