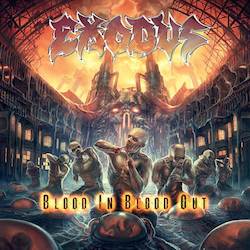 To state one thing quite clear from the start: I admit that there is an Exodus fanboy in me. The day that I bought Bonded By Blood is his date of birth. He forces me to begin this review with the most positive detail of Blood In, Blood Out. Exodus deliver one song which can definitely compete with the classics of their early works. The outstanding 'Body Harvest' can be considered as a valid argument for the immediate purchase of this full-length. It possesses everything that a thrash metal anthem needs. The strong verse coalesces into a highly dynamic bridge and the long drawn-out screams during the chorus are as fantastic as the flattening riffing after the well executed solo. An unexpected highlight, a masterpiece in every respect.

Having this in mind, the focus can be set on the songs in general. Exodus fire some unerring shots from the cannons of thrash metal. One can discover a lot of thoroughly designed tracks that do not lack of speed, pressure and musical violence. Apart from this, the band has recorded a few convincing mid-tempo tunes. They stand in the tradition of songs such as 'Toxic Waltz' or the underrated 'Only Death Decides'. Just listen, for example, to 'My Last Nerve'. These tracks are much more than just a supplement. With one or two exceptions, the songs of Blood In, Blood Out do not fail to hit the nail on the head. In general, the tunes demonstrate the strength of an experienced yet belligerent horde of thrash metal seniors that avoid successfully to get a midlife crisis. Despite of this, one thing is for sure. The magic of the group's early days will never come back. But somebody else has returned. Of course, you know the man I am speaking about: Zetro Souza. To be quite honest, I am relieved.

"Rob Dukes" - this is not only the name of the worst Exodus singer so far. It seems to be simultaneously the shortest definition for a guy you do not like without knowing him personally. Perhaps it is unfair, but he always appeared to me as the incarnation of unsocial behavior. However, the well-known voice of his successor (and predecessor) fits much better to the tracks of Exodus. Zetro always seems to be at risk to go mad within the next seconds. His hysteric screams, which are occasionally accompanied by some gang shouts, strengthen the effectiveness of the restless guitars that march forward without pausing to draw breath. Speaking of the guitars: on the one hand, the pulsating riffs know no mercy due to their prevailing high speed approach. On the other hand, it takes some time in order to distinguish them from each other. After all it is good to know that mastermind and main songwriter Gary Holt still keeps the strings together. He is the reason why Exodus still - or again - sound like Exodus. Even more, his way of playing the guitar gives rise to the question of whether it was really necessary to engage guest musicians, whatever they may be called.

Due to a slight lack of catchiness, it takes several times to realize the amazing high quality of the full-length, inter alia its liveliness and its energizing effect. However, while other albums sometimes become quickly tedious, this one is getting more and more exciting. This gratifying process seems to be caused by the positive attitude of the band. The five bundles of energy apparently feel comfortable with their situation. In accordance with their expert status in terms of thrash metal, they just play the music they like to play without taking commercial aspects into closer consideration. The deal with the German industry giant Nuclear Blast seems to ensure the necessary quantum of artistic freedom. And what's maybe more important, the production budget was evidently high enough to create a very powerful sound. For example, the bass guitar is omnipresent and adds value in a remarkable manner. The drums, skillfully handled by Tom Hunting, represent another excellent feature in view of their heaviness and variability. The modern guitar sound is flawless, except if you think that modernity in itself is a flaw. In such a case, you probably will blame the sound for being sterile and lifeless.

All in all, the US-Americans prove that the band does not belong to these kind of aging groups that have a glorious past, a mediocre present and definitely no future. It goes without saying that their groundbreaking debut will remain unsurpassed forever. But unlike its two predecessors, Blood In, Blood Out adds another noteworthy item in the voluminous catalogue of Gary Holt's thrash institution. Only the ugly cover sucks. Enough said. I have to listen to 'Body Harvest' once again. Or, better still, to the entire album.

So, what we have here is album number ten from the legendary Bay Area thrashers Exodus. And without beating around the bush let me just say that YES, I am very happy to have Zetro back! This is the way Exodus should sound.

While Rob Dukes was alright, he wasn’t anything special, and in my opinion never really fit in with the Exodus sound. He was too much of a screamer, and not enough of a singer. He didn't have the soul of Exodus and just generally came off as a too aggressive shouter, which just doesn't work with their sound. You don’t need false “tough guy” vocals to sound aggressive, which Zetro happily proves on this album.

So album number ten, huh? I think it’s pretty safe to say that most of us were underwhelmed with the past few Exodus releases. While some good tracks were sprinkled here and there ("Funeral Hymn" is still amazing) overall it felt like filler. So, what we have here is more old school Exodus, which is not a bad thing. Because when Exodus get it right, they really get it right. So let’s see what they've come up with in this new installment of Bay Area thrash.

"Black 13" is what I would call a mediocre intro to an album. Though it gives us many clues of what’s to come – a nice, thick guitar sound, rumbling bass, and Tom Hunting’s trademark thrash beats, which sound nice and punchy and clear. The song itself is nothing to write home about, though. I just expected better. Thankfully, the next track “Blood In, Blood Out” delivers on all levels. Classic Exodus from start to finish, this is what I wanted to hear. Exactly what I wanted to hear in fact. Fast, brutal, catchy – it pretty much has it all.

Easily one of the highlights on the album has got to be “Salt the Wound”, which features Kirk Hammett. I personally thought this was a pretty cool thing to do, as Kirk was a founding member of Exodus. So, for him to return to the band and deliver a guitar solo was a nice touch. People saying that it was just done for a marketing gimmick… well, you may be right. But it didn't bother me at all because the guy has every right to be there. That said though, this is easily one of the best songs on the album. The riffs are just pure, no nonsense thrash, with a fair amount of groove thrown in. Tom’s drumming just seems to make the song, as the bridge leading up to the guitar leads just wouldn't work without that double bass groove. Kirk’s performance here is good, though obviously it’s nothing ground breaking or earth shattering. He pretty much came in and did what he did back in the day when he was allowed to do the same in Metallica. And come on, that’s not a bad thing. The song on a whole however gets full points from me, it’s just pretty badass.

"BTK" is another track which features a guest performance, and this time it’s Chuck from Testament. Sadly, the song does pretty much nothing for me. To be honest, most of the rest of the album doesn't do much for me. There are some good tracks sprinkled here and there such as “Body Harvest”, “Food For the Worms” and maybe “Honor Killings”

One thing about this album, and with new Exodus in general, is that the songs are just too damn long. An Exodus song should never pass the five-minute mark. After that you’re pushing it, and there are six songs here which are over six minutes long – and that’s more than half the album. Cut it out. Exodus songs should be short, to the point, and aggressive. Around four minutes in length is perfect for them, and it seems that anything after that just turns into a chore.

Overall, I both like and dislike this album. The positives are that it sounds great and that Zetro is back. The negatives are that it’s simply just not interesting enough. I was expecting more this time around, especially since the last two albums didn't go over so well. Don’t get me wrong, it’s still fun to listen to from time to time, but strangely most of it just goes in one ear and out the other. There’s nothing really to cling onto... and the songs are just so goddamn long.