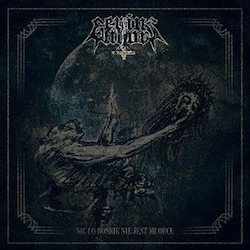 Four years after the release of their first album Dzien Nocy, Genius Ultor comes back with Nic Co Boskie Nie Jest Mi Obce (nothing that is divine is alien to me). Wirus, Zgorzel and Kra, who created this album, come from Polish death/black metal band Stillborn and Genius Ultor is considered their side project. I’ve been listening to this album for quite a while now and it seems to grow more on me every time I do so. Some consider it to be black metal release but to me it is so much more. The sound of it, its morbid atmosphere and lyrics that reject any sympathy for living things ooze an aura of degradation and without a doubt can trigger uneasiness and maybe even fear in weaker individuals. As depraving as it sounds, there is even more to this album than that.

Any of you out there giving this album a try will surely notice a very unique sound of this album. Black metal hordes out there got us used to a certain criteria they go by when it comes to the way they sound, but Genius Ultor are taking it a step or two further and make their album sound dissimilar to anything I’ve heard in the past. Nic Co Boskie Nie Jest Mi Obce is an album that sounds sickening, vulgar and somewhat primitive, where primitive is used in the best sense of the word of course making it raw, vehement and vindictive. This is an album that needs to be listened to as a whole because even dissecting these seven songs into pieces and into separate instruments will bring exactly same results. Guitar, drums and vocals operate with intensely repulsive ranges and all of them are ready to cut your throat with their sonic blades tarnished with hate. They will not wait for you to put your hands up; they will attack and butcher you looking straight in your eyes. This is black metal at its ugliest and most repugnant. Musically songs move from fast and merciless thumping into more atmospheric pieces giving you a false hope of attack being over just to come back and rip through your sanity again. Black metal it is called but to me some arrangements on the album are oscillating between black, punk and maybe even hard core, which is being an abomination in itself. Lyrical layer is also unconventionally blasphemous. Written entirely in Polish it exploits life, its aspects and religious elements by using their own words combined with some excerpts from Polish poetry between other elements and going into sacrilegious territories. All of them screamed, growled, shouted or maniacally screeched pierce through your senses leaving you shaking in disbelief. Glorious combination of elements put brilliantly together and executed flawlessly.

Genius Ultor created an ugly, intimidating and arrogant beast. This is an album that should be listened to or rather blasted out loud. It can alter the way you perceive black metal and can turn you against everything you consider acceptable in this genre. Nic Co Boskie Nie Jest Mi Obce is an album that anyone and everyone should give a spin because it could be an indication of what transformation is coming in the future for that style. Is it going to be accepted? We’ll find out.