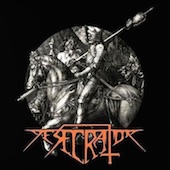 The movement back to thrash excites me. Many new artists are being influenced by not only the ‘Big Four’, but they are finding other bands that were really great yet were overshadowed by the big ones or overlooked all together. Desecrator from Down Under is one that was listening to all of it and more... and took note.

Sounding like a capsule of my teen aged years, they combine some of the influences that painted my life. Testament, Overkill, older Metallica mixed with all of the NWOBHM era stuff ends up being both a tip of the hat to the old guard while charging ahead with something that is so original as well. A feat only a few bands could attest to. Desecrator delivers a thrash attack, and brings it all up-to-date.

Four tracks were offered here. Four very amazing slabs of titanic six-string-mass-frenzied attack. It’s very intense, headbanging wild and so powerful that the whole EP ends up being instantly memorable. These crazy Aussies have truly captured the very essence of what thrash was and is while giving the music this way cool extra massive twist. That is all that culminated in the fact that it kicks some serious ass.

Simply put, this EP is a mosh pit waiting to happen. Just insert the disk in, turn the sucker loud and you have the soundtrack for a circling, sweat and blood fueled pit. I can’t believe these guys have been hiding in Australia all of this time because these dudes just might be the next cornerstone for a new Big Four. Get the damned EP and spread the word about Desecrator to everyone you know. Thrash is alive and wants to kill all poser metal.