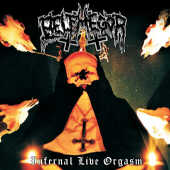 I’ll be the first to admit that Belphegor’s last studio album, "Necrodaemon Terrorsathan", did not send me doing cartwheels out of my chair in pure unadulterated excitement. It was just a slightly above average package, ripe with a few choice cuts, but nothing to write home to mother about.

This new album, which is a ten year anniversary collection of live tracks, new cuts from the upcoming record, two demo tracks from the early days of Belphegor and two video clips, is pretty damn spiffy, however. Even without a lot of new material, "Infernal Live Orgasm" is a quite a special album from Belphegor. Essentially, it is a best-of collection from these Austrian lads.

If you have been living in the sewers for the past ten years or so, Belphegor play a crossover brand of heavy death metal in the vein of Morbid Angel, and some say black metal that is sort of like Dark Funeral; thus if you combine the two you come up with Belphegor, apparently. Personally, I believe this is a load of badgers and that the end result of combining Dark Funeral and Morbid Angel would sound something like Zyklon. Regardless of the end result, "Infernal Live Orgasm" is a finely put together album of metal goodness.

Belphegor have never sounded faster or more aggressive than they do in this output, regardless of what I thought of "Necrodaemon Terrorsathan", it was a bloody fast metal album, and Belphegor have put on an incredible live set that is simply mindblowing to behold. The opening track, ‘March of the Dead’ is complete gobsmacking in its output. Production values for this live set from Belphegor are quite amazing and I must say it would be one show that I would have enjoyed seeing.

The two new tracks ‘Swarm of Rats’ and ‘Der Untergang Pt II’ are quite a step up from "Necrodaemon Terrorsathan" and with all fingers crossed there should be a decent new album on the way. The video clips of ‘Vomit Upon the Cross’ and ‘Purity Through Fire’ (which is live), are both good and bad respectively. The former sees the Belphegor boys taking a stroll through the cold into a church firing a few guns along the way, while the latter has awful sound quality and it is a shame it doesn’t live up to the sound quality of the rest of the disc.

Bottom Line: Very cool concept for an anniversary album; there are 8 live tracks, 2 new studio tracks, 2 old demo tracks and 2 video clips. Add the fact of even faster live playing and top notch production and you wind up with a pretty decent album, by all accounts.