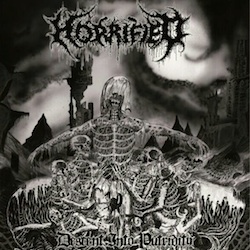 My impression initially was that this was going to be another labile, boring debut with a crap production. The production is kind of raw, but the music is good, and I actually have acquired to like this album. I don't care if they changed their style of music with their follow-up album, this one is pretty decent death metal. The album itself isn't very long, just about 30 minutes in length but the riffs are pretty unique. So, what sets this aside from other death metal albums, you may ask? Here are some facts: the riffs are pretty original and catchy, vocals are a bit raw sounding, low and somewhat muddled and the music compliments the vocals greatly.

Aside from the raw production for a debut, this is not say like Carcass's "Reek of Putrefaction". That's an example of a pure, raw production sound. On this one you can make out riffs and the snare drum isn't so overpowering. They did a good job here and I'm curious to hear how their new album will sound with a little lineup change from their somewhat latest work Allure of the Fallen that falls under the melodic death metal. That one was more melodic than anything else. This one is very much death metal oriented. I suppose that they wanted to go in a different direction than what they put out here forth with the strict death metal genre.

The leads are pretty good, and each member seems to contribute a lot musically. The main guitar (rhythm) is pretty fast here I like what I'm hearing. Wish I could compare the sound to something besides Carcass (old). The vocals are guttural and compliment the music well and even though there are melodic sides to their playing its mostly just in-your-face brutality. It gets better and better as the album progresses and I'd say I favor some tracks over others, but the fact is that rarely will every track of an album do you like all equally. It'd have to be something substantial. And as a debut, not all are going to be shared equally with praise to others.

Show the band some respect and support by purchasing a physical copy. Full 30 minutes of brutal UK death metal and in no way does this drag on or gets boring. The whole thing is worthy of praise but the riffs I like the most. Guitars dished out some innovative things and they were able to make something of themselves with this album. They created a monstrous album here. Buy it!