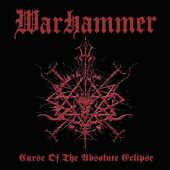 I do not think that we need a long opening speech with regard to Warhammer. A lot of metal fans have never heard a song of the band, but everybody knows that the guys from Germany hail this certain black metal legend from Switzerland. (I am sorry for having forgotten its name, but I am getting old.) It goes without saying that the Germans continue to stick to the proven concept. The guys of Warhammer celebrate the glory of morbidity, and they do it in an experienced manner.

Based on a solid level of musicianship, the band provides its special kind of aesthetics. Simple melody lines sound sick and seem to originate from a slightly disturbed brain. Primitiveness and violence are combined and they outline a very dark and cryptic picture. The rusty guitar sound conveys the feeling of mortality and squeaking feedback effects increase the degenerated aura. If you want to get warmed up by the sun, you have to leave the dark realm of Warhammer.

As a matter of course, Warhammer's song-writing process has not much in common with any kind of inventive activities. The band is not interested in trying out something new. This would be a cardinal sin, because the strict concept must not be damaged. Warhammer have defined a clear priority. The compositions follow the concept, not the other way round. Hence it follows that unnecessary absurdities, for example acoustic guitars, female vocals, violins or saxophones do not occur. "Modern" stylistic devices like blast beats are missing as well. Warhammer pay a price for this way of proceeding. Bands that reproduce the sound of a previous legend will hardly gain a high degree of popularity, but they are always at risk to be dismissed as copycats. So what? The guys do not care about this situation. As already mentioned, their concept is holy and anything else is of minor importance. Frankly speaking, I like this kind of stubbornness.

The songs themselves show a more than solid talent for the creation of comprehensible pieces and it does not take much to identify a handful of highlights. 'Dawn Of The Cadaver Ghoul' constitutes a prime example for the approach of the band. Based on a primitive yet expressive riff, the song develops constantly while praising the artistic form of death. The guttural voice of the lead singer avoids any kind of variety, maybe in order to emphasize the lifeless aura. This song is equipped with a mid-paced rhythm and this is not an isolated case. The opener, usually a representative song, is in no hurry as well. Nevertheless, Warhammer do not eschew faster arrangements. Perhaps you like to lend an ear to 'The Conqueror Worm'. Its streamlined flow cannot push the omnipresent rotten aura into the background. Generally speaking, this contrast between the smooth guitar lines and the sick atmosphere fuels the songs of the album in an interesting manner.

The production is neither perfect nor amateurish. However, its tinny drums and the heavy-handed guitars match the archaic style of the band and this is the main thing. In view of the fact that no filler disturbs the homogeneity of Curse Of The Absolute Eclipse, I see no reason to stay away from this full-length. Surely it is not trendy and it fails to deliver an element of surprise. But it constitutes an authentic and unswerving work of four dudes that worship - for good reasons - a band that has left its mark on the evolution of extreme metal.