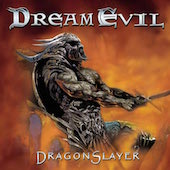 Type: Full-Length
Release Date: 2002
Label: Century Media Records
Genre: Classic, Heavy, Power
1 Chasin The Dragon
2 In Flames You Burn
3 Save Us
4 Kingdom Of The Damned
5 The Prophecy
6 The Chosen Ones
7 Losing You
8 The 7th Day
9 Heavy Metal In The Night
10 H.M.J
11 Hail To The King
12 Outro

Advertised as ‘the ultimate new force in Melodic Heavy Metal’, Dream Evil is the name of a new Swedish metal outfit that is a brainchild of no one less than Fredrik Nordström, owner/producer of the famous Fredman Studio who, other than of course producing it, plays guitar and keyboard. The impressive line up features drummer Snowy Shaw (Mercyful Fate, King Diamond, Memento Mori), Greek guitar wizard Gus G (Mystic Prophecy, Firewind), and vocalist Niklas Istfeld with bassist Peter Stalfors who both were involved in early Hammerfall releases.

“DragonSlayer” opens with the catchy ‘Chasing the Dragon’ which sets the tone for the rest of the record as mix of classic heavy metal with rock elements from 80s American scene. Maybe I shouldn’t just say catchy, it’s hit-potential catchy. All tracks are so melodic, ear-friendly tunes you won’t notice when you started signing along. With hyper-melodic and rocking songs like ‘Save Us’, ‘Heavy Metal In The Night’ or ‘H.M.J (Heavy Metal Jesus)’, memories of bands like Firehouse keep coming back and force me to play air drums or guitar, whatever feels right. Fans of classic metal genres or rock in general will find a lot to praise here; the speedy HammerFall-esque ‘The Prophecy’, the more bombastic ‘The Chosen Ones’, ‘Losing You’ a ballad, or the heavy metal flavored ‘Hail To The King’ are all top notch quality tracks and while not being overly complicated represent good songwriting abilities and the excellent music craftsmanship of this band’s members.

This album wasn’t recorded to bring death and destruction but rather joy, happiness and... dragons. I know, I know... dragons are so overused in metal that it almost hurts but Dream Evil seems to be picking this subject just for fun and not really giving damn about it. At least they don’t wear armor during photo sessions pretending being knights.

Bottom Line: If you’re one of ‘true’ death/black metal fans stay away, otherwise “DragonSlayer” will rock your world.