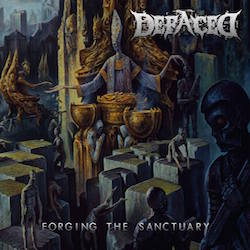 Type: Full-Length
Release Date: January 3rd, 2015
Label: Rising Nemesis Records
Genre: Death
1 Because I Despise
2 Antithesis
3 Rapture Through Bondage
4 Sower Of Discord
5 And With It Rose Satan
6 I, The State, Am The People
7 Forging The Sanctuary
8 Venomous Eden
9 Humanity's Lost Hope
10 You Get What You Deserve
MetalBite on YouTube

Musicians from Swiss Defaced started playing together in 2006 under a different name (released only a demo and an EP as Trigger Tones) and this is their second full-length album (previous "On the Frontline" was released in 2012). Unfortunately I didn't have opportunity to hear their previous LPs, so I'm going to focus on the material that is currently on my headphones.

Usually I am not keen on describing music from album that I'm currently reviewing using the name of just one genre. Mostly because in 90% of cases what I can hear is not for example pure death metal and I actually like it, to me such albums always have an advantage against other, more purist material.

First of all death metal presented by Defaced has some elements of grind core - low tuned guitars, bass line put quite in the front and distorted, low growling vocals. Then there is also black-metal-ish shrieking with quite blackened chords, which remind of Swedish school of black metal (Dark Funeral or Marduk). It is a material consisting all kinds of variety of fast-paced riffs, with nearly each track having different technique used. As always, any solos get some extra points in my reviews, although in this particular case there's room for improvement in establishing the style as sometimes they sound slightly too cautious to me. But the overall complexity of riffs, the changing of melody lines or changing techniques during the same melody line are impressive and the whole album is really full of good ideas on how to record solid death metal album, executed with a really high level of technical perfection. I would probably put it on the shelf with Katalepsy, with close proximity to Carcass (the earlier one) as well. The sound is quite clean, you can clearly hear both guitars and bass (the album has been mixed in Hertz Studio in Poland), no unnecessary reverbs in the background, only occassional 3 guitar lines, creating additional space when needed and bass only slightly distorted, which is a good choice in my opinion.

Each track really has something else to offer. The first represents the kind of death metal/grind core mixture played by Katalepsy, second is more black metal, third has some psychodelic, dysharmonic riffs, which change to melodic during solo (brilliant passage by the way), in fourth you can hear faster passages, which Marduk would be proud of, fifth reminds of Hypocrisy-style death metal, sixth is quite chaotic (in a good way) with frequent changes in tempo, seventh also quite frantic, fast-paced with some solos reminding of Paradise Lost, eight a bit more organised, with riffs that bring to mind some of the best Hate tracks, ninth is the most melodic on this album, with really good solos, tenth probably has to be my top track because of fragment from my favourite Hellraiser: Inferno halfway through the track and the eleventh track ("End of Torment") is a good closing composition with brilliant solo.

Various flavours of extreme metal can be found on this album, strong recommendation for fans of all styles mentioned above with really good sound production. I already can't wait for their third album, as I'm superstitious and I think it will be the best.