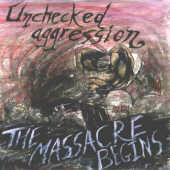 Yes, I am aware the opening sentence is just a different wording for the band name, all I can say is that the group is very aptly named. Now let’s see what these boys have to offer... energy? Check! Great solos? Check! Aggression... unchecked! Sound cheesy? You bet that’s the vibe of this album. No hate, blood, gore or any of that nonsense, just ass-kicking old-school metal that makes for a damn good time or an even better live show. The comical intro will put you in the right mood as you witness the birth of this relatively unknown and unsigned band that thrashes like the best of them. Definitely one you’ll hear more about in the near future.

Unchecked Aggression are a breed of the classic Slayer or Overkill thrash metal style, laced on one end with some Maiden-esque melody and on the other with angry punk. While proudly waving the flag of metal’s past glory days, they throw in enough kicks to rock the world of any young metal fan of today. I am proof of that. For older fans the album will bring back rich memories of a metal era perhaps forever gone. Eleven songs, consistent throughout and varied, that manage get your body thrashing and your soul screaming for more. The musicianship of each member can hardly improve; all that is left for these guys to work on is tighter playing. Basically this is a band that has very little to improve on, and while this is fantastic at the moment, it may later come as hindrance in future days as their sound might waver.

For a self-released album I am amazed at the high quality production. Bass lines are exceptionally good and propel rhythms that get your head bobbing like mad. It is the guitars that drive the songs with most thrash metal bands, but here the situation is often times the opposite: it is the drums and bass that form the framework for the songs while the guitars add in clever licks and hard riffs. I think this is what makes Unchecked Aggression a more interesting outfit than many old-school bands. If these guys played in the 80’s they’d get attention for doing something different. Overall, it is hard to find a fault in this album, one reason I didn’t give it a higher score is because old-school thrash is not quite my cup of tea, with more albums like this, though, that may well change soon. Good stuff!