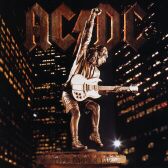 Whoa, Brian Johnson opens the album with clean vocals? Not for more than 30 seconds, buddy. But it makes me want to hear more.

For a band that hasn't changed a damn thing (with unfortunate exception to the loss of Bon Scott) since it's start some 25 years ago, I find it downright unreal that this band can continue to pump out minimalist-metal guitar crunching albums.

As with each album, this one contains anthems such as the title track, Can't Stop Rock n' Roll and Sattelite Blues that will surely keep the crowds in screaming chant synchronicity.

AC/DC was always known for their minimalism rather than expirimentation. As much as I love AC/DC, having heard much the same come from them over the past 15 years that I've been a fan, I think that the world could do with a little expirimentation from this band. They seem to be touching on it with tracks like the Thunderstruck-esque hammer & pull ditties Hold Me Back & Can't Stand Still along with the mantra song Safe in New York City, but it's not quite enough yet. Let's hear some more of those clean vocs!

Bottom-Line: Collect 'em all! This is Ass Kickin' Bluesy Classic Metal, more countries should have boulevards named after this band. (Spain already has!)