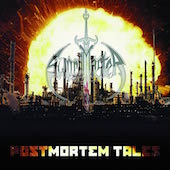 Maybe the guys of Swordmaster anticipated that their career would be pretty short and so they decided to call already their debut Postmortem Tales. It's a pity that they transformed into a useless combo called Deathstar, because they actually had the momentum on their side. A contract with Osmose was the aim of thousands of underground musicians at that time, but the Swedish formation was not able to take advantage of this situation. Why? Well, their song-writing capabilities did not outshine the skills of their competitors, to express it politely. Some parts of the debut remain interchangeable and very generic. The raw and simple riffs are not bad, and the level of aggression is absolutely acceptable, but there are not many songs with memorable sections. Especially the unobtrusive choruses do not score with catchy lines. Thus, the majority of the songs just passes by.

Of course, exceptions confirm the rule. "Metallic Devastation" is a nice mix of blast beats driven sequences, a gloomy bridge, further fast parts and swirling riffs. The song lives up to its name, because it cannot be denied that it offers a devastating aura. As far as I remember, it was the band's contribution to an Osmose sampler called "World Domination", where Swordmaster met other label comrades such as Impaled Nazarane, Absu, Immortal or Driller Killer. Guess it was no coincidence that the French company exactly chose this number for its label sampler. But this does not mean that "Metallic Devastation" constitutes the only good song here. Numbers like the straight and uncompromising title track please me as well. It is therefore a pity that the band was not able to create some individual trademarks. As much as I regret it, there is no specific reason to throw the here reviewed disc into the CD player as long as one has 15 or 20 further thrash records. Aggravating the situation, one can call the whole material homogeneous, but also somewhat monotonous. Really fiery, intensive sequences remain rare, but the mid-part of "Claws of Death" awakens the dead.

Yes, you are right. I am not really able to forget their feeble-minded Deathstar experiment and therefore I am probably biased. So, in all fairness, the songs are not bad, the singer conveys an adequate mix of anger, hysteria and wickedness and the protagonists avoid major flaws successfully. But more than 20 years after the publication, this kind of blackened thrash metal is not enough to be still relevant in a scene which has grown rapidly during the last two decades. In addition, I cannot ignore that the production also does not provide a unique selling point. Hi-fi dogmatists will cry - I think it's okay, even though the bass guitar is sidelined, and the entire mix has a noisy touch. Summing up, the overall impression remains pretty ambivalent - buy the album on special offer or leave it be and create your own post mortem tales.