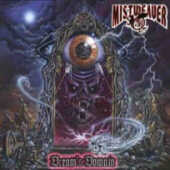 ::   ::
Type: Full-Length
Release Date: 2001
Label: Medusa Productions
Genre: Death, Melodic
1 Intro
2 ...And A Child Shall Lead Them
3 A Wighered Rose Fro The Dead In Sin
4 The Call
5 Ritual Of Death
6 The Night Is My Guide
7 Dream's Domain
8 The End Is Near
9 Into The Lake Of The Burning Sulphur

Mistweaver originate in Burgos, in the northern part of Spain. They are a relatively unknown band around the metal scene, and probably gained the most attention of their young careers with the ‘Repulsive Revenge Tour 2000’, which saw them playing alongside big name metal acts such as Centinex and Into Darkness.

Mistweaver released a demo CD in 2000 dubbed “Sol Obscurabitur”, and following their demo have gone on to release this debut album. Comprising of 9 songs and running for around 40 minutes, “Dream’s Domain” is chock full of entertaining keyboard melodies laced with competent guitar breaks and run of the mill vocals. When I say run of the mill, I don’t mean to put a damper on Raul’s guttural surge. He is obviously a competent vocalist and his strain of death vox suits the material that's on “Dream’s Domain” suitably.

To pigeonhole “Dream’s Domain” (for the benefit of the genre addicts out there), I would throw the debut album into the melodic death metal category, but this label probably does not do them a huge amount of justice. Yes, it is death metal with some melody, but not in the normal sense that we all have to come to identify melodic death metal as. The keyboard consonance from David really sets the music apart from the normal twin guitars and clean/harsh vocal interchanges that are the stock standard reality on melodic death releases today. The keyboards are heavily stained in the joyous tunes from the dark ages of Europe.

“Dream’s Domain” is, overall, a pretty impressive debut from these youngsters from Spain. However, I do have a few little criticisms. My main beef with Mistweaver is that the first few songs on “Dream’s Domain” are a little too slow to get going. Effectively what I think Mistweaver should have done is maybe axed everything from ‘...And A Child Shall Lead Them’ through to ‘The Call’, and we would instead be presented with a totally nut-crunching epic EP. Aside from that factor and maybe the mix of the keyboards should be toned down a notch or two, allowing the guitars a little room to breath, Mistweaver have come up with the goods.

Bottom Line: It is good to see some new bands breathing life into a boring scene. Mistweaver, while with a few faults, have enough energy and tempo to bring home the bacon with “Dream’s Domain”.