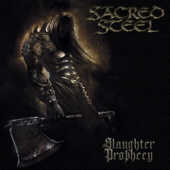 ::   ::
Type: Full-Length
Release Date: 2002
Label: Massacre Records
Genre: Epic, Power
1 The Immortals Curse
2 Slaughter Prophecy
3 Sacred Bloody Steel
4 The Rites Of Sacrifice
5 Raise The Metal Fist
6 Pagan Heart
7 Faces Of The Antichrist
8 Lay Me To My Grave
9 Crush The Holy, Save The Damned
10 Let The Witches Burn
11 Invocation Of The Nameless Ones

Sacred Steel kick open “Slaughter Prophecy” with the short intro track, ‘The Immortal Curse’ which follows on to some of the weirdest and wackiest combination of power and death metal I have laid ever my ears upon. The opening song ‘Slaughter Prophecy’, starts off with some slow to mid tempo guitar riffing before the pounding of the skins breaks in... "alright, this is pretty good," I begin to think. That pounding drumming soon warps the slow to mid-tempo guitars into blinding and shredding guitar numbers. "This is starting to get damn good... we could be onto a winner here!" I exclaim in pure excitement. Harsh and unforgiving death metal vocals soon raise the bar another notch; "this could definitely be a strong 8+/10 mark," my adrenaline levels are starting to rise, then terror strikes...

After the furious roars from the Sacred Steel vocalist start erupting from my speakers, what can only be described as the highest adolescent boy wail possible rips through my sound system, interrupting my short lived bliss. In pure shock, I throw a brick at my stereo. Stuff that, I need to calm down. That was some truly awful garbage.

It is just plain unforgiving as to what Sacred Steel did to ‘Slaughter Prophecy’; the song had absolutely everything going for it, but when the power metal whines reared their ugly little heads, I was almost ready to relegate “Slaughter Prophecy” to coaster status.

After picking my stereo up from the local electronics bloke, I very gingerly pop “Slaughter Prophecy” back into the CD player and brace myself. Summoning all my restraint, I sit there and absorb the full 45 minutes of Sacred Steel.

Jumping forward a few hours, I can honestly say that “Slaughter Prophecy” is not quite as awful as I thought it would be. In fact it is just marginally better. If you dig the power metal clichés of ‘Raise the Metal Fist’ and ‘Let the Witches Burn’, then you are truly a metal crusader and will probably find more redeeming features than I did on “Slaughter Prophecy”.

Bottom Line: This crap is just too much for me. Why on earth would you use rubbishy teenage angst whining, when you have such an untapped resource is death metal vocals? Only for the true power metal warriors out there!