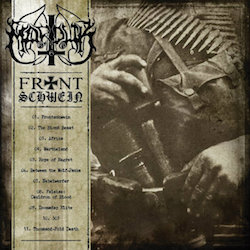 If you like authentic bands as well as extreme metal, it is not difficult to be a fan of the Swedish institution called Marduk. The war veterans have proven their ability to walk the thin line between unbroken harshness and appropriate development. This means that the guys are immune against the Status-Quo-syndrome. They do not release one and the same song again and again. Without affronting their supporters, there is always the necessary quantum of development. Frontschwein is another document of devastation. In terms of the lyrics, Marduk repeatedly discover World War II thus, I cannot really speak of innovative boundlessness. Yet the dimension of the event justifies this way of proceeding. Nevertheless, it is somewhat irritating that they perform the third song whose lyrics deal with Reinhard Heydrich. Didn´t they already bury him (remember the sinister "Funeral Dawn")? Well, the memorable yet slightly harmless "The Blond Beast" pales beside the unchained "The Hangman of Prague" and the ironclad "Funeral Dawn". However, Heydrich was an enigmatic personality so that Marduk´s morbid fascination for him may be understandable. Unlike Hitler and Goebbels, he was a blond (!) Nazi model as well as a loving husband. A man with a good education and a deadly affinity to a misanthropic ideology. Hard against himself and against others. The latter can also be used in order to describe Marduk, because the band still stays true to its musical brutality without taking the losses into consideration. Or to say it less martially, commercial success is not intended, in any case not in the usual way.

Frontschwein is not the best album of Marduk. But their abundant discography is setting very high standards and the full-length does not disappoint. The talented band presents itself in good shape, no more, no less. While knowing exactly the formula for a strong black metal piece, Morgan and his comrades-in-arms do not hesitate to storm the enemy lines. For example, "Wartheland" appears as the sonic definition of mercilessness. It roughly follows the unremorseful slow-moving approach of the aforementioned "Funeral Dawn". It’s terrifying riffing shines with cruelty and the double bass adds the highly welcome pressure. For those of you who are interested in history, the lyrics will probably have an inspiring effect. As always, read all about it in order to form your own opinion. In sharp contrast to songs like "Wartheland", "Rope of Regret" and some further tunes open the machine gun fire of the drums. These tunes pine for total destruction and the result speaks for itself.

But the guitars also add a melodic touch, just give "Between the Wolf-Packs" a chance. Of course, the combination of thunderous drums and obscure guitar lines is a well-established strength of the experienced band. However, these core competencies of the group appear as the driving forces of the album. Conversely, innovation is of subordinate significance. Be that as it may, the full-length does not lack of variety. It is a fact that almost every new track which is based on the aforementioned combination knows to impress. "Falaise: Cauldron of Blood" serves as another example in order to emphasize this statement. This tune scores, among other things, with incredible hyper-speed. Nonetheless, it would be a mistake to believe that Frontschwein is an album of superlatives. The velocity and furiousness of Panzer Division Marduk remains unrivalled. The here described full-length relies on the mix of tempo changes, stubborn straightness, fierce vocals and fiery guitar lines. Vice versa, humanity is written in very small letters. The ruthlessness of World War II comes back to life, although we will never be able to imagine its overwhelming horror.

Let´s keep an eye on the big picture. Ten songs hit the mark, only the overlong "Doomsday Elite" cannot keep up with the rest. Right from the beginning, the riffs call for war and irrespective of the approach of the single songs, the military aura is omnipresent. It can therefore be concluded that the coarse title Frontschwein does not promise too much. In terms of the compositions, the album delivers a lot of different facets of war while being equipped with an armor-plated sound. During World War II, Frontschwein expressed both respect and compassion for the German soldiers on the front line. Marduk has built a sonic memorial for the combatants. Their output honors the unknown soldiers on the front line, regardless of their nationality. It may be a crude kind of remembrance, but it is not disrespectful.