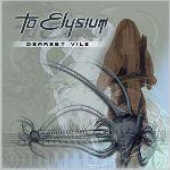 According to the Greeks, Elysium was the abode of the ghosts of the virtuous dead. The inhabitants of Elysium were said to reside in a state of perpetual bliss and blessedness...

To Elysium circa 2002 is a Gothic metal band who relive the Greek myth of Elysium by transporting us through some 40 odd minutes of splendid empyreal atmosphere with their account of the trip To Elysium. "Dearest Vile" is an anecdote of the pilgrimage.

What we have in essence with To Elysium is Gothic metal not short of the temper in which Battlelore and Tristania play. The noticeable difference to the approach that To Elysium take is that the melodic feminine vocals of Esther take a firm front seat ahead of traditional death metal vocalist Rein. The aforementioned bands, Battlelore and Tristania, are on the flip side of the equation with their testosterone fronters taking the patriarchal role.

"Dearest Vile" is a concept album in every sense of the word. The band name "To Elysium" is based around a strong mythological concept. "Dearest Vile" is the exposé of the band's journey. From the opening 'Harangue' (if you have seen the movie Gladiator, this should bring back some nostalgia for you) to the closing 'Doomcraft', each song is a glimpse into the world of To Elysium. Strong keyboard melodies give rise to an otherworldly décor represented time and time again between the articulated interplay of Esther and Rein.

Summing up, if you enjoy your metal with a Gothic touch boasting literal and metaphorical lyrical concepts that take a matriarchal vocal format, then I doubt you need look further than "Dearest Vile".

Bottom Line: Fans of the whole Gothic metal vibe will definitely be raving. Those who are not so big on Gothic metal, may want to give this a look just for the concept of "Dearest Vile", if nothing else.