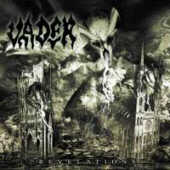 With a history spanning eight albums and over fifteen years, it still doesn’t surprise me that Vader are amongst the death metal elite. Their keen sense of finding excellent riffs and solos combined with their knack for over-the-top song writing has kept these guys at the top of the pile since the dawn of time. Now “Revelations” is here and Vader shows us once again how death metal should be played.

Musically, “Revelations” is a continuation of their last true studio album, “Litany”. It’s got the pounding double bass and blast beats emanating from Doc’s drum set, the tremolo picked riffs followed by intense solos from Peter, and it all moves along at breakneck speed with enough tempo changes to stay interesting. “Revelations” also manages to keep the catchiness that was created on “Litany”; a fine aspect to the music considering it didn’t come about at the expense of other defining elements. The song writing is once again excellent. While the majority of the music moves along like a hurricane, the band’s attention to moodier solos and also mid tempo riffing makes “Revelations” all the more enjoyable. Every section of the music holds power within it and it all fits together at the end. This warhead will rip you apart from the instant it hits until the moment it rests. “Revelations” rains down like an apocalypse in today’s over saturated death metal scene. It rocks the way it should rock; it holds the strength to be remembered, it’s unique, and last but not least it’s one hundred percent Vader.

Having said that, I can’t help but compare “Revelations” to the bands earlier work. After the mammoth album “Litany”, I’m not sure if “Revelations” really towers over it or at the least stands up to it. It surely is an awesome album in 2002, so I suspect people’s opinions between the two will be split. Besides the fact that Vader had expectations to meet for their fans and themselves, but I’m a bit disappointed in the progression from Vader. They simply seem to be refining their craft, which is fine, but they have it in them to push the boundaries even farther. But I digress, and must say that Vader continue to stand tall amongst other acts still.

Bottom Line: Vader have done it once again in creating a great album that stands tall and looks down upon the seen. An amazing album from a great band, once again.