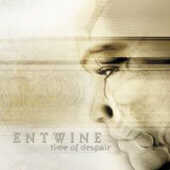 Entwine plays emo-metal. Sometimes it’s very hard for a metal fan to consider Entwine a metal band because they come across as some sort of alt-rock band like Live given a goth-metal edge. For those of you familiar with the genre, it’s the same sort of deal that HIM goes through, but they have a stronger goth fan-base, giving them slightly more credence because they sing about gothic love and crap that somewhat falls in the metal arena.

Entwine’s music isn’t bad, in fact, sometimes it’s very good, but dammit, this is chick-metal that would only appeal to guys that have recently endured some sort of first-love break up... or guys that just can’t seem to get any and are obsessed with some untouchable girl.

So what does "Time of Despair" have to offer? There’s the occasional violin, big goth-rock guitars, lots of atmospheric keyboards, a vocalist who always sounds like he’s really sad about something or another, what occasionally sounds like New Age music and non-stop melody.

The album gets wussier with each track.

Bottom Line: If you play metal at your parties and you want the women to stay, put this emo-metal-rock disc into the mix along with the latest from HIM. This is soft-metal.