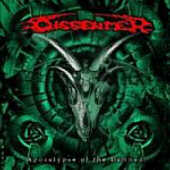 Dissenter, for all you metal trivia freaks out there, used to be the once mighty Bloodlust that were kicking it big time in the late 80s and early 90s with the likes of the infamous Vader. After countless concerts and touring, Bloodlust disbanded the band after a few muck ups with then current label, Loud Out Records.

Circa 2002, sees Bloodlust reformed under the name of Dissenter. "Apocalypse of the Damned", is the welcome back album, if you like. And make no bones about it, this will be one that rejuvenates the tiring death metal scene, and maybe clear away the incessant and countless melodic death metal bands out there.

Musically speaking, this isn't exactly a non-linear trip into the future that will mark the dawn of a new era of brutal death metal; instead we are greeted with a comforting trip down memory lane which will see many a hardened metalhead weep in sorrow at what has become of the death scene today. Dissenter is undoubtedly one of the tickets needed to pass back into the hallowed days of the 1990s when all the classic big name death acts were out recording the good stuff.

Bloodlust were consummate professionals in their day. It beats me why they reformed under a different name. Surely they could have weathered the storm a little and stuck it out under Bloodlust. But no matter, Dissenter hopefully, unlike Bloodlust, is here to stay. If "Apocalypse of the Damned" is anything to go by, we should be treated to some sound death metal in years to come.

Bottom Line: This is traditional brutal death metal. Not exactly groundbreaking, but as solid as finding a soccer fan in Brazil. If you are put off by the lack of balls in death metal today, then I have no qualms about introducing you to "Apocalypse of the Damned".