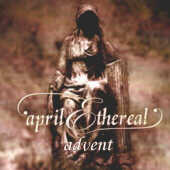 Reeking of everything Opeth could imagine for a song title, band name and album name, April Ethereal are not going do to their name much harm in posing as a part-time Opeth cover band. Fortunately for April Ethereal (and consequently this review), the Opeth similarities pretty much stop with their song titles, band name and album title. Let me assure you this is a very good thing. What the metal world doesn't need is a hundred little Opeth clones running around trying to outdo each other, as well as Opeth themselves.

April Ethereal play a doom-dark-death brand of metal with a few twists and turns. Take the second track, ‘The First Step Into the Unknown’, for example. Starting off this four-minute number is some thunderous drumming provided by Jan, followed by some extreme shredding by guitarist Jerzy. Soon after, the vocal line ‘You walked through like a shadow of the night’ opens the song up, proceeded by some beautiful acoustic melodies that wash into the song, giving some brief respite to the murderous death onslaught from April Ethereal.

If this sounds like your cup of tea for a metal album, then do make haste to the record store, as you will not be disappointed by the haunting sounds of April Ethereal and their debut “Advent”.

Lyrically, is where it will hurt April Ethereal. It’s not that they write like a handicapped three year-old monkey. In fact, it’s quite the opposite. The problem is that the lyrical content is very much on the same romantic page as Opeth circa “Orchid” or “Morningrise”. Whichever way you look at this, it does make a pleasant change from the abundance of more contemporary/urban lyrics of today.

One point of interest that is worth taking a look at is the production values of “Advent”. Very similar in style as to what Dimmu Borgir did with “Stormblast” way back in 1996. This of course may put a lot of people off, but I dig the more primeval and raw sound of “Advent”, and I really do believe a crystal clean production would hamper the effect that April Ethereal were striving for.

The strongest aspect of April Ethereal is their ability to weave a song through many eras of world music. Numerous times during a song the listener is presented with some very ethnic or traditional folk elements that remind one of very different musical backgrounds around the world. Could this be because April Ethereal lie between what is known as Western Europe and the Eastern block of former Soviet countries? Who can say, but whatever they are doing, “Advent” has certainly picked up some very cool influences along an interesting pathway.