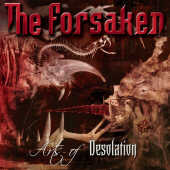 Right on the heels of their 2001 debut “Manifest Of Hate”, The Forsaken comes back with the monstrous “Arts of Desolation”, taking their trade one step further in combining melody with thrash and brutal death metal. Without the original bass player Michael Hakansson, who decided to focus on Evergrey, this Swedish quartet recorded an album that is the most complete fusion of Swedish melody and American brutal death metal I’ve had the pleasure to lay my ears on.

Combining the Scandinavian sound (post At The Gates era) with brutal death riffs and the aggression of old school thrashers, The Forsaken will satisfy a big chunk of today’s extreme music fanatics. Guitar duo of Stefan Holm and Patrik Persson (who also handless bass) molest their instruments in any possible way known to a modern guitarist. Filled with masterful guitar work, solos, rhythm changes and their technically superior skills shine not only in the way they handle their axes but also with how much ease and tact they go from one style to another. While pounding your head to the ground with dark testaments to the inspiration of Morbid Angel like ‘Dethroned’ or ‘Injected Terror’ they’ll start chopping trashy riffs with so much aggression and precision that an older generation of metallers might drop a shed a tear in nostalgic convulsions.

While lead by skilled twin guitars “Arts of Desolation” is a heaven for any guitar freak I would commit an unforgivable mistake not mentioning the human machine behind the drum kit. Merciless pounding by Nicke Grabowski is not only based on speed but on an unlimited number of rhythm changes and outstanding musical tact that gives more identity to each song. Adding to complete picture is vocalist Anders Sjoholm who goes from infernal guttural vocals to throat screams and anything in between with so much ease you might think there’s definitely more than one vocalist in this band.

And just for sake of a little bitching at the end I would love to hear more of all those elements integrated in every track rather than concentrating on one style in one song and playing the next song in another. I believe The Forsaken is able to achieve this perfect mix on their next album but till then enjoy one of the best albums of this year.

Bottom Line: “Arts of Desolation” is just few steps from a masterpiece and unless you’re are not in an excellent health condition hide your head between your legs and wait for mammy because those insane Swedes went through my room like tornado and nothing seems to be the same anymore.