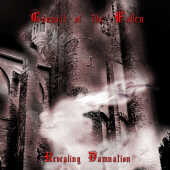 After the initial surprise of this not being a pure death onslaught, I realized that I’ve just heard one of the best mixtures of death and black metal in years. Given the state of the US black metal scene, it’s even more satisfying hearing not only something that tops everything in the States, but also stands a head and shoulders above most of the albums coming from the rest of the world. The balance between those two styles is so impeccable that I’m not sure if “Revealing Damnation” is a death metal with a black touch or the other way around.

Twelve tracks of devastating aggression were composed with such precision and intelligence that not a single note feels like being wasted or unnecessary. All songs are based on memorable riffs, careful arrangements, tempo changes and limitless skills of respective musicians; this material can’t leave you bored. Tracks like ‘Search for Purpose’ or ‘Shadowed Horizon’ can make pure black metal acts look like pansies and countless moments of outstanding gut-spilling death metal riffs overshadows most of each member’s alma mater band’s material.

While most of the time Council of the Fallen goes through “Revealing Damnation” with a blazing speed, the musicians’ experience doesn’t let the songs slip out of control. Every time you get to the point that a section might feel monotonous they’ll change the tempo, style, riff, vocal; and they’ll do at the exact, perfect moment. ‘Lying in Wait’ or ‘Remnants of Existence’ are perfect examples of COTF going from blast beats to mid tempos laying monstrous riffs, crushing your skull. This album doesn’t have weak tracks, only good ones and outstanding ones; that makes Council of the Fallen “Revealing Damnation” an album that will never see the dust gathering section of my collection.

Bottom Line: “Revealing Damnation” is not only a debut of the year contestant, but a future standard on how death and black hybrid metal is going to be played. I only hope that their heavy involvement with other projects won’t stop them from evolving as a band and delivering even more mind-blowing albums.