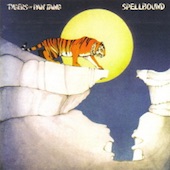 In the same way that Iron Maiden tightened up their sound and found one of metal's most well-known vocalists by their third album, Tygers of Pan Tang did much the same by their second release, Spellbound. So long Jess Cox, everyone say hello to John Deverill. The new guy has a golden set of pipes and would take the band all the way to their career's initial end in 1987. I'm not afraid to throw this out there, but thus far, he's my favorite singer I've heard from the NWOBHM scene... so long as we're discounting Rob Halford anyway. Before Joey Belladonna was around to prove to everyone that this style of vocals works well in thrash metal, Deverill was doing it in a band that certainly had a hand in leading up to the thrash metal sub-genre, ultimately sounding nearly exactly like the now more well-known Belladonna. The band has a new guitarist as well, John Sykes, now well known for his work in Thin Lizzy and Whitesnake. He didn't stick around for very long, only for a single year in 1981, but thankfully 1981 was also the same year that brought us not one, but two albums, with the release of Crazy Nights coming out towards the end of the year.

So fortunate are Tygers of Pan Tang that they perform for a genre whose fans are usually more than happy to give a band a second chance, not that they necessarily needed one, the band was standing pretty solid on top of semi-hits such as "Euthanasia", "Killers", and "Don't Touch Me There". The Jess Cox led Tygers were probably energetic enough to keep the train rolling, but upon hearing Spellbound, I'm pretty sure we can all agree that we'd rather be hearing the restraints being removed, allowing them to write songs they otherwise probably couldn't have such as the melodramatic "Mirror" or "The Story so Far", which makes heavy use of the major scale to go for a pop song that many metal heads probably aren't going to be too enthused about, but I dig the fact that the band are sounding way more focused than before. Compare the solo of "The Story so Far" for example, to the befuddling solos of the last album, which were alright, but all kind of sounded the same and gave off much the same rock n' roll vibe with the moments of originality spread pretty thin. "Money" was one of my favorite songs from the last album but happens to be the worst offender of staying within the safe pentatonic box that so many guitarists unfortunately call home. Recruiting the new vocalist was a great move, indeed the addition of John Sykes seems to have had an even larger impact on the band as a whole, arguably the best thing the band ever did for influencing the band's direction from here onwards, as we can tell from listening to later releases that the pop influence certainly stuck around from some of the band's more popular recent tracks such as "Damn You" or "Only the Brave"

It seems to have had a small impact at the time of its release as well, stylistically Tygers of Pan Tang sound way more supercharged than on their previous album, while Wild Cat was certainly a force to be reckoned with when taken on its own terms, Spellbound takes the energy to another level with a better singer, catchier hooks, and an overall more laser focused approach to what it is they're trying to accomplish. It seems they may have even inspired the artwork for another NWOBHM band known as Wolf for their album "Edge of the World". This refinement to the band's sound of cutting out all the excess fodder in the songwriting really scales Tygers of Pan Tang up on their competitive edge. Spellbound may not have the savage riff writing masters that are Mark or John Gallagher from Raven among their ranks, but regardless is an album that gets across that wild, ferocious, break stuff in an alcohol induced frenzy party rock that made Rock Until You Drop such an amazing album. When I think of NWOBHM, this is exactly more of the stuff I seek personally. Wild Cat has its charm, its own distinct flavor, there are certainly things I miss from that album, I definitely think the rhythm guitars have gotten a little less creative, and as much as the lead does make up for it, I'm afraid that the small touches that did make Wild Cat a solid album such as the nuance behind the intro to "Slave to Freedom" aren't really present here. The songwriting has gotten quite a bit more linear even if the band has branched out in other ways to encompass a more diverse sound.

Most people don't like the idea of a band becoming more pop-influenced, often a symbolic step in the sellout direction, it can be a good thing though when utilized without giving up much character in the process. Spellbound makes itself a little bit of a controversial album for me in that regard because while I would say it's a better album, Wild Cat did lend itself to more spontaneity and even a more thorough approach to songwriting whereas their sophomore release seems to be more content with writing songs that comprise a very little more than a verse and a chorus, as is the case with "Silver and Gold", or even the title track for that matter. "Tyger Bay" does much the same. On the plus side, it's easy to digest and accessible, on the negative side it does take the band down more of a vanilla avenue. "Silver and Gold" especially feels too repetitive for my tastes with a chorus that isn't very developed, offering nothing more than the harmonized singing of the song's namesake a couple of times before getting back into the meat and potatoes of the song.

At the end of the day, Tygers of Pan Tang haven't sacrificed so much of their traditional hard rock sound to completely alienate listeners, some may even say, myself included that Spellbound is more characteristic of the sound of the era, definitely mirroring more of the pop-inspired acts such as Def Leppard on songs such as "Don't Stop By" and mixing it with a tad bit of the raw rock n' roll they'd founded themselves on. Not an that should've been forgotten the way in which we all now know that it was, Spellbound makes for one of the more definitive releases of the era if you're willing to dig a little deeper than Iron Maiden and Def Leppard. Solid to a tee, not without its flaws, and to be perfectly honest, I don't think the bonus tracks one can find on reissues of the album make it any more worthwhile, though most would probably agree that more of what Spellbound already offers isn't a bad thing. For those that do go for the reissue, you're in luck because there were a whopping five tracks that were left off the initial release. That being said, I think the band chose the best of the best with the exception of the obvious filler instrumental that is the twenty second "Minotaur". Also, I probably would've swapped out "Silver and Gold" for "Bad Times" as it's the one song that really recalls the more thunderous sound of the debut album, and that would certainly fill a hole that the album was missing to some extent. Nevertheless, the fact that it wasn't included really displays that it was a conscious decision to make the album as fine-tuned as possible when it comes to track-by-track cohesiveness. So, if you see anyone whine about Spellbound being an inconsistent album, you can be sure to write them off, chances are they fall below a tyger on the food chain and they're just salty about it.