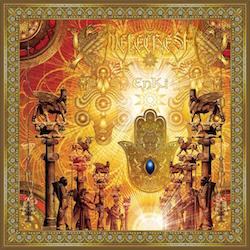 Here we have Melechesh's album from 2015. I have read that the name of the band means "King of Fire", but I am sure this is a common misconception. There can be no doubt that Melechesh is the Hebrew word for "the most intense intensity". Whenever the dudes get wild, they celebrate a brilliant orgy of sharpness, relentlessness and, yes, musicality. Already the fierce opener will blow unsuspecting listeners away. The mix of the typical metal elements with the oriental ingredients still works in an exciting way, and the level of intensity, as indicated above, is mostly second to none. Nevertheless, we also know that the experienced musicians have more to offer than just sheer franticness.

For example, they master the creation of a dense, melodic yet extremely heavy number as well. "Multiple Truths", a stomping mid-tempo piece with the characteristic sharpness of the guitars, provides evidence. The vocals spread a bitter aroma and contribute an insane feeling, a solo guitar is responsible for a fine melody at the end - and everything works perfectly. The same conclusion applies for "The Pendulum Speaks" with its swirling riff, the demonic vocals and the fundamental aggression. Melechesh's art opens the gates to infernal, fiery regions. They pull the audience into their songs with great easiness, while the music itself does not even show the smallest sign of ingratiation. The band is able to design very eventful songs that are immune against symptoms of fatigue. So many things happen - without hurting the flow of the respective track - that everybody is well advised to focus closely on the listening experience.

Nuclear Blast productions are mostly blessed with an adequate budget. As a consequence, they sound either completely soulless or pretty perfect. Fortunately, Enki falls under the second category. The cutting guitars deliver the main feature, but the entire album boasts with a very direct and expressive appearance. Furthermore, it has this dangerous charm that daunts non-metal fans. Although the admixture of the oriental harmonies indicates hot temperatures, the devilish vocals add a very cold touch. Finally, the rhythm section does not come off badly as well. Especially the machine gun called double bass increases the level of brutality successfully and accompanies the violent guitars very well. No doubt, there is nothing wrong with Enki, neither in terms of musicianship nor in terms of the technical implementation.

Critics might say that the album is not innovative, and the band forgot to take the next step. Frankly speaking, this kind of yammering is something I don't understand. As far as I can see, Melechesh have created their own niche of metal and thus, they have been more innovative than 99% of their metallic competitors. Furthermore, I am able to enjoy twenty old school thrash albums each year which have more or less the same musical approach. With that said, I have absolutely no problem to listen to a new Melechesh album that picks up the style of its precursor after a break of five years. I rather tend to criticize the tradition of their overlong folkloric numbers. "Doorways to Irkala" with its devoted percussion is acceptable, but not really necessary. Yet this type of songs must be understood as a part of the concept and at the end of the day, it doesn't matter. More than 50 minutes of great music remain. The only slightly questionable detail is that the single tracks need some time to develop their own individuality, but this also does not constitute a grave problem. Summing up, Enki prolongs the series of (very) good Melechesh albums, no more, no less.

It's been always my dream to find a good band that would mix extreme metal with Middle Eastern melodies as I always thought that it would be a perfect combination. Throughout many years I found only few examples when it worked well (in my opinion, of course, not everyone has to agree). I guess the first impressive example was Clawfinger with their "Two Sides" with guest vocals by Antoinette Saigh. I know it's not really a true metal band, but I cannot recall better mix of something close to the genre with Middle Eastern atmosphere around 1997. Next good attempt worth mentioning in my opinion is Cradle of Filth with their "Doberman Pharaoh", I still get goose bumps when listening to first sounds from it. And obviously Rotting Christ had a decent attempt in their "Enuma Elish".

But I was always waiting for some band which would focus on this magical mixture and release the whole album with that in mind and that's why I was following Melechesh for some time to hear their style develop and I have to say this band is getting better and better at it with every next album.

And I think that "Enki" is really close to that ideal Middle-Eastern-black-metal I'm craving for. It's their sixth album, so their technical level is now really impressive and it shows with more diversity in melody lines used. If you haven't heard the band before, I would compare it to Dimmu Borgir, but with the aforementioned Middle Eastern melody lines and I mean more harsh, old-school Dimmu, with less keyboards. Really impressive drumwork, with powerful blast-beats, especially the opening track "Tempest Temper Enlil Enraged", which reminds a lot of opening track from "Emissaries", "Rebirth of the Nemesis". The album has generally quite raw atmosphere, with tracks packed with many riffs, all kept in the same climate, much of the time filled with 3 or more guitar lines. It definitely is not an easy album to get used to, solid 3-4 listenings before you get the flow of the rhythms, passages and leading melody lines. What I really like is that the sound is not too polished, therefore it maintains dirty, chaotic style. The atmosphere is also enhanced by pitch effect used mostly on guitars playing leading melody lines.