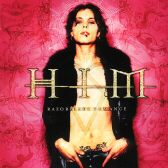 Type:
Release Date: 2000
Label: BMG
Genre:
1 I Love You (Prelude To Tragedy)
2 Poison Girl
3 Join Me In Death
4 Right Here In My Arms
5 Gone With The Sin
6 Razorblade Kiss
7 Bury Me Deep Inside Your Heart
8 Heaven Tonight
9 Death Is In Love With Us
10 Resurrection
11 One Last Time

Him (His Infernal Majesty) has released yet another Metal/love CD. While it is hard for me to think that love is an accepted metal topic; I have an even harder time classifying this band as metal at all. This band has given themselves an evil name and written songs like ‘Your Sweet 666’, ‘Poison Girl’, and ‘Join Me In Death’ just to capture the consumer eye. The pink cover seems to be for the same reason. I mean who the hell has ever seen a pink CD in the metal section? However covers don’t classify the band; music and songs do.

The music in “Razorblade Romance” is actually quite well done. All the members compliment each others playing, which adds a kind of mysterious quality to the music. The music flows together in such a way that it is hard to define which instrument ends where. The overall effect of the music is good, but "Razorblade Romance" seems to sound the same in each song, both vocally and musically.

Vocalist Ville seems obsessed with women (maybe because he looks like one?), and all his songs follow that one desire. His voice however does have a nice tone, and I can see the possibility of a good metal career for him. The deep morbid quality of his voice weaves itself into the listener’s mind, and blends in perfectly with the music, which sometimes makes it hard to focus on the lyrics themselves. His voice does however, have one demeaning quality; he never really shows a large vocal range. His voice keeps it’s dark and dismal tone, which makes a lot of the songs on “Razorblade Romance” sound very similar, and can get on a person’s nerves quite easily.

The lyrical content on the varying tracks on “Razorblade Romance” are indecipherable from one another, which adds to the monotony that the listener will experience with the almost identical musical style present on all tracks. HIMs’ cover of ‘Wicked Game’ (originally by country music singer Chris Issac) proves to me that this band is anything but a pure metal band. Every song in “Razorblade Romance” has the same subject, which leads me to see that this band has no originality at all. While I know that many bands sing about women, and love especially in the doom genre of metal, HIMs’ previous CD’s seem very similar to this one. The band just hasn’t explored any other subjects or sounds.

I find that HIM has not done anything that really deserves a lot of merit at all. All the songs are simply Ville’s ranting about his love life. The lyrics are simple and could probably be written by that retard in the back of the class if he got put down by women enough, and while the music flows, it seems to flow exactly the same in each song.

Bottom Line: I can’t respect a guy who wears pink makeup and writes songs that could be played on the lite music radio station. To a metal fan this is blasphemy, but I can see it going far as a rock band.