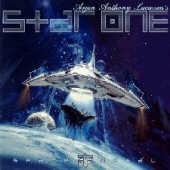 There are no mistakes in the album title, for this is space metal in every sense; the keyboards are reminiscent of galactic flight, the lyrical content theme is all based on science fiction movies, and the entire album was constructed by one man, Arjen Anthony Lucassen... suggesting he’s an alien like Moby and Beck... ok, so the music really has nothing to do with those two artists, but you get the idea.

As a notorious power-metal hater, I found myself confused and annoyed by my contradictory taste for this album. But the more I listened to it, the more I realized why I liked it better than all the other power-trash that’s out there.

To start with, I’m a sci-fi fan. I love all things sci-fi, even if they suck. But this isn’t one of those items of grande-suckage. See, a big part of this is album that a few different vocalists are used to play various character parts of the song to tell classic sci-fi stories, from Dune to Star Wars. Knowing those stories makes listening to the album all that much more fun, because there is no direct reference to any of the story or movie titles, just the plot played out in the lyrics, making the album a bit of a puzzle to challenge sci-fi fans.

Beyond that, the fact that there are four different vocalists here, and none of them (well, maybe one) opted to clamp a clothespin to his ball-sack, along with the fact that the songs are guitar driven rather than the keyboard-drowned fluff that bands like Sonata Arctica put out. In fact, some of the vocals done by Symphony X’s Russel Allen are all-out manly; a feature rarely found in progressive/power. I’d love to hear Geoff Tate on the next Star One chapter.

Now to move on to the music in a broader scope, the progressive melodies and arrangements never get boring, always shifting to something new and better before it ever has a chance. At times the music can hit you like an ominous wall of space-born strength such as in 'The Eye of Ra' (about the film Stargate).

Bottom Line: This is the most interesting and best power-progressive metal release I’ve heard since Queensryche’s "Operation: Mindcrime".